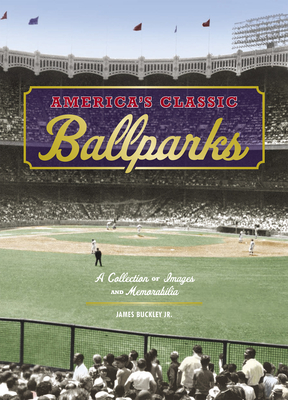 A Collection of Images and Memorabilia

Winner of the Gold Award for Sports from ForeWord's 2013 IndieFab Book of the Year Awards That ball is outta here -- out of the ballpark that is. Baseball parks are as American as apple pie and America's Classic Ballparks commemorates six ballparks guaranteed to spark nostalgia for the old ball game. Complete with ten removable replicas of historic ballpark documents, America's Classic Ballparks is a wealth of information on these beloved national landmarks. Reliving everything from opening day at Fenway Park to the top ten moments in Yankee stadium, ballpark enthusiasts will revel in stadium trivia and cherish the historic photographs found throughout these pages. Authored by prolific sportswriter James Buckley Jr., America's Classic Ballparks is the perfect addition to any sports library.

James Buckley Jr. is the author of more than 60 books on sports for adults and young readers, including Obsessed with Football (Chronicle), Eyewitness Football (DK), Eyewitness Super Bowl (DK), and American's Greatest Game (Hyperion). He is a former senior editor with NFL Publishing, where he helped create NFL.com, wrote for NFL publications including the Super Bowl Program, and helped produce several books. A former editorial projects manager for Sports Illustrated, he is the president of the Shoreline Publishing Group, a major sports-book producer based in Santa Barbara, California.
Loading...
or
Not Currently Available for Direct Purchase