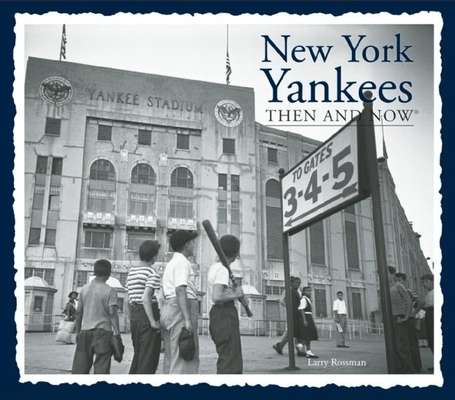 It's root root root for the home team, and for generations New York Yankees fans have done just that. Undoubtedly one of the most beloved and one of the most despised teams in baseball history, the Yankees had such stars as Hall-of-Famers Yogi Berra and Reggie Jackson on their roster. New York Yankees Then and Now takes readers on a visual tour of this celebrated ball club from their beginning as "the Highlanders" to Gehrig's four home run game and beyond. Exciting then and now match-ups compare contemporary events to those of the early days with subjects like training camps, bleacher bums, and opening day. For the serious sports collector and rookie fan alike, New York Yankees Then and Now is an engrossing pictorial of this renowned team.

Larry Rossman's love of baseball and the Yankees started in 1960 when his father took him to his first game at Yankee Stadium. Mickey Mantle hit a home run in the right-field seats and the Yankees beat the Detroit Tigers. From then on he was hooked and tried never to miss a game. Rossman started collecting baseball cards and learning about the game and the Yankees' history. He also developed an ongoing interest in player stats. A collector of Yankee memorabilia, his two favorite pieces are a Mickey Mantle autographed photo signed in person and a seat from the original stadium which, despite his wife's objections, takes pride of place in his living room. He works for a major insurance company and lives on Long Island, NY, with his wife Amy.
or
Not Currently Available for Direct Purchase
Copyright © 2020 American Booksellers Association