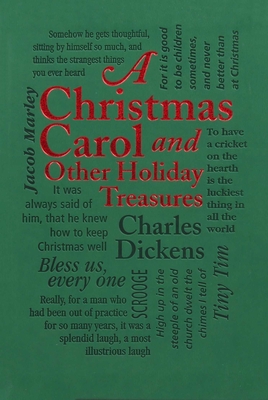 Brighten the season with tales from the master of Christmastime fiction.

Charles Dickens' most famous holiday story was the 1843 publication, A Christmas Carol, but he was a prolific writer in the yuletide genre and a great contributor to many now-prevalent traditions of the holiday itself. In the year following the release of A Christmas Carol, Dickens released The Chimes: A Christmas Story of Some Bells That Rang an Old Year Out and a New Year In. This story combined his usual sympathy for the poor with the notion that we must always strive to live in nobler ways. In 1845 came The Cricket on the Hearth, a novella that, in its time, surpassed even A Christmas Carol in popularity for stage productions. The years 1846 and 1848 respectively saw published The Battle of Life and The Haunted Man and the Ghost’s Bargain. Given this wealth of Christmas-themed works, it is no wonder that Dickens is sometime referred to as “the man who invented Christmas.”

Perfect for both fans of Dickens’ work and those who just find special pleasure in the holiday spirit, these five Christmas stories are now available as part of the Word Cloud Classics series, providing a chic, inexpensive introduction to timeless tales.

Born on February 7, 1812, Charles Dickens is one of the most popular literary authors of all time. After a very tumultuous childhood, Dickens finally succeeded in getting his first story in a London periodical. As the number of his published works increased, so did his fame. Although he died in 1870, Dickens works are some of the most famous written works in the English language.
Loading...
or support indie stores by buying on