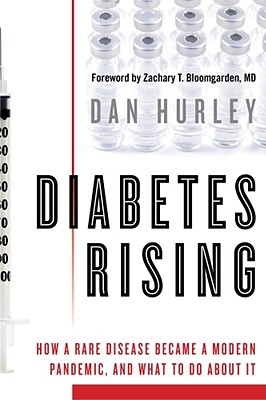 How a Rare Disease Became a Modern Pandemic, and What to Do About It

Nearly 90 years after the discovery of insulin, with an estimated $116 billion spent annually on the medical treatment of diabetes in the United States, why is diabetes the one major cause of death that’s been relentlessly rising for a century? Diabetes Rising investigates why the nearly two dozen medications approved for type 2 (adult-onset) diabetes, and all the high-tech treatments for type 1 (juvenile-onset) diabetes, are failing to slow this modern pandemic of Western civilization. The book also profiles promising new approaches that are making significant strides toward preventing, curing, or dramatically improving treatment of the disease. Written by Dan Hurley, a regular contributor to the science section of the New York Times (and himself a type 1 diabetic for over 30 years), Diabetes Rising breaks medical news by revealing: