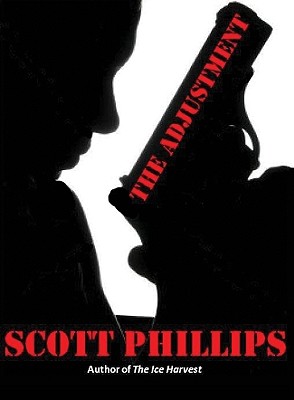 “Wayne Ogden has returned home from WWII, working as a caretaker and procurer for his debauched boss, while itching for the same action he had as a shady supply sergeant. It doesn't take long before he gets involved in blackmail, pornography, and murder even as he receives a bunch of mysterious letters from someone aware of his criminal past. Playing fast and loose with the dark side of the 'Greatest Generation,' Scott Phillips once again creates a tight, funny noir that's rich in character, and makes the profane sacred.”
— Scott Montgomery, Book People, Austin, TX
View the List

Wichita, 1946. The war is over, and the boys are coming home. But some cannot adjust to the nonviolent world of civilian life.

The Adjustment follows Wayne Ogden careening like a pinball through a troubled postwar Midwest. Wayne, an ex-supply sergeant, black marketer, and pimp, is trying hard to make it as a husband, father and civilian in Wichita, Kansas. But old temptations keep crying out to him as he serves as bag-man and procurer for his elderly and increasingly debauched boss, Everett Collins, founder of Collins Aircraft Company, and Wayne's wandering eye makes it hard for him to stay true to his beautiful, trusting young wife Sally.

A series of events further complicates matters: A boardroom conspiracy at Collins aimed at throwing him out on the street; his increasing certainty that he knows the identity of the Wichita Butcher, whose specialty is leaving severed body parts in public places; and finally, his failure to identify the author of a series of poisoned pen letters from someone who knows more about his recent past than he wants revealed. When these elements converge, it's all Wayne can do to keep his wits about him and orchestrate a bloody series of events that will determine whether he can stay in his hometown or go on the run.

Wayne's problem is that he doesn't know which prospect sounds worse.
or
Not Currently Available for Direct Purchase
Copyright © 2020 American Booksellers Association