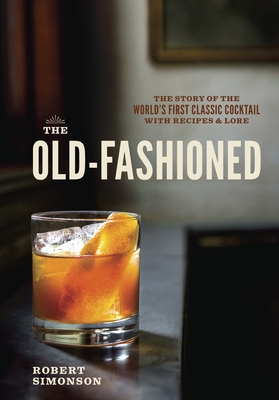 The Story of the World's First Classic Cocktail, with Recipes and Lore

A complete history of one of the world's most iconic cocktails--now the poster child of the modern cocktail revival--with fifty recipes for classic variations as well as contemporary updates.

No single cocktail is as iconic, as beloved, or as discussed and fought-over as the Old-Fashioned. Its formula is simple: just whiskey, bitters, sugar, and ice. But how you combine those ingredients—in what proportion, using which brands, and with what kind of garnish—is the subject of much impassioned debate.

The Old-Fashioned is the spirited, delightfully unexpected story of this renowned and essential drink: its birth as the ur-cocktail in the nineteenth century, darker days in the throes of Prohibition, re-ascension in the 1950s and 1960s (as portrayed and re-popularized by Don Draper on Mad Men), and renaissance as the star of the contemporary craft cocktail movement.

Also featured are more than forty cocktail recipes, including classic variations, regional twists, and contemporary updates from top bartenders around the country. All are accessible, delicious, and elegant in their simplicity, demonstrating the versatility and timelessness of the Old-Fashioned formula.

With its rich history, stunning photography, and impeccable recipes, The Old-Fashioned is a celebration of one of America’s greatest bibulous achievements. It is a necessary addition to any true whiskey—or cocktail—lover’s bookshelf, and destined to become a classic on par with its namesake beverage.

Praise For The Old-Fashioned: The Story of the World's First Classic Cocktail, with Recipes and Lore…

"an excellent history of the Old-Fashioned"
—Rien Fertel, The Wall Street Journal

"Robert Simonson is such an engaging author that he makes this the perfect book to accompany an easy chair and a well-made Old-Fashioned cocktail . . . An incisive, impeccably researched story of this too often forgotten classic cocktail, resulting in some good rollicking stories that American history is rich in."
—John Mariani, Huffington Post

"[...] you won’t be engrossed in his book just because of all the mythology surrounding this storied drink. It’s filled with gorgeous photos of the Old-Fashioned in its eponymous glass and with recipes (which comprise a good half of the book) both traditional and modern, swapping out the whiskey for pretty much every other spirit available."
—Ariana Auber, Austin American Statesman

"Simonson takes us on a witty and engaging tour through the drink’s long history and ends with recipes for traditional mixes and experimental twists. Like a good old-fashioned, his writing is dry but sweet; it’s got a kick, but is also low-key and best savored slowly."
—David Cote, Time Out New York

"If you like a little lore with your whiskey, then this book is for you. It covers the story of how this one drink has survived from the early 19th century, through Prohibition, and now back again to being one of our favorites. [...] Alone or with a bottle of rye, this makes for the perfect holiday gift for the drink lover on your list."
—Maureen Petrosky, The Kitchn

ROBERT SIMONSON, journalist and author, is one of the leading authorities on spirits and cocktail culture in the United States. Called “our man in the liquor-soaked trenches” by the New York Times, he has written extensively about cocktails, spirits, bars, and bartenders for the Times, as well as GQ, Wine Enthusiast, Wine Advocate, Imbibe, Edible Manhattan and Edible Brooklyn, and Time Out New York. He lives in Brooklyn, New York.
Loading...
or support indie stores by buying on