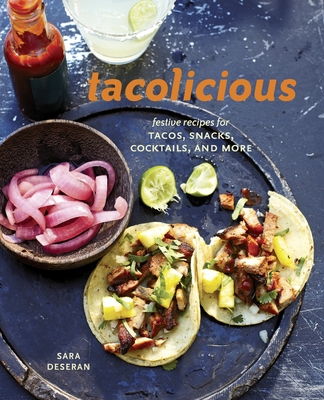 Festive Recipes for Tacos, Snacks, Cocktails, and More [A Cookbook]

Tacos may be the most universally loved, happy-making food on earth. After all, who can say no to a juicy, spicy Chile verde taco; a decadently deep-fried Baja-style fish taco; or a gloriously porky Carnitas taco? At Tacolicious, the San Francisco Bay Area’s most popular Mexican restaurant, tacos are a way of life. And now, in this hotly anticipated cookbook, co-owner Sara Deseran shares all of the restaurant’s tortilla-wrapped secrets. Whether you’re seeking quick and easy weeknight meals or inspiration for a fabulous fiesta, Tacolicious has you covered. With recipes for showstopping salsas, crave-worthy snacks, cocktails and mocktails, and, of course, tacos galore, this festive collection is chock-full of real Mexican flavor—with a delicious California twist.

Praise For Tacolicious: Festive Recipes for Tacos, Snacks, Cocktails, and More [A Cookbook]…

“The restaurant Tacolicious doesn’t take itself too seriously. I love it for that. From delightfully non-traditional recipes such as chile con queso to Yucatán salsas with serious street cred, Tacolicious unapologetically combines Californian and Mexican influences. It may not be ‘classic’ Mexican, but who cares? It’s tasty stuff.”
—Jake Godby, co-owner of Humphry Slocombe

“Tacolicious is my favorite after-work snack and tequila stop, and this cookbook lets readers who aren’t lucky enough to live in the neighborhood recreate the restaurant experience in their own homes.”
—Craig Stoll, chef/owner of Delfina

Sara Deseran is the co-owner of Tacolicious with her husband, Joe Hargrave, and the editor-at-large at San Francisco magazine. A longtime food writer and author of three previous cookbooks, Deseran lives with Hargrave and their kids in San Francisco.

Joe Hargrave has been working in Bay Area restaurants since the 1990s, first as the head of operations at Restaurant Lulu, Rose Pistola, Azie, and Frisson; then as the owner of Laïola, which he closed in 2009 to make way for Tacolicious.

Antelmo Faria is the executive chef of Tacolicious.

Mike Barrow is the restaurant’s COO and former beverage director.

Tacolicious has five locations in the San Francisco Bay area. Visit www.tacolicious.com.
Loading...
or support indie stores by buying on