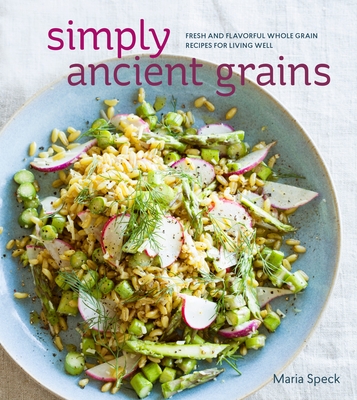 The award-winning author of Ancient Grains for Modern Meals, Maria Speck makes cooking with ancient grains faster, more intuitive, and easier than ever before in this collection of recipes, most of which are gluten-free.

From black rice to red quinoa to golden Kamut berries, ancient grains are showing up on restaurant menus and store shelves in abundance. Yet in home kitchens, many fear that whole grains are too difficult and time-consuming to prepare. In Simply Ancient Grains, Maria makes cooking with these fascinating and nourishing staples easy and accessible with sumptuous recipes for breakfast, lunch, dinner, and dessert. Her family-friendly dishes are Mediterranean-inspired and delicious, such as Spicy Honey and Habanero Shrimp with Cherry Couscous; Farro Salad with Roasted Eggplant, Caramelized Onion, and Pine Nuts; and Red Rice Shakshuka with Feta Cheese. Maria’s tips and simplified approach take whole grain cooking to the next level by amplifying the flavor and enduring beauty of these nutritious grains.

“Maria Speck is my whole grain guru. She conjures the appeal and sumptuousness of these wondrous staple foods in a way that makes me want to run to the kitchen immediately and start cooking. Her passion, knowledge, and good taste are reflected on every page in this beautiful book that makes eating whole grains more approachable and inspiring than ever.”
–Ellie Krieger, RD, host of The Food Network’s Healthy Appetite and author of Weeknight Wonders

“Simply Ancient Grains is an ode to bringing whole grains into the modern kitchen, not simply as ‘health food,’ but as nourishing and delicious additions to the home cook’s pantry. The artful recipes make use of unique flavors and textures, weaving together the exotic and the familiar. For the whole grain lover, this book is a trustworthy reference and an inspiration.”
–John Becker and Megan Scott, authors of Joy of Cooking

“Maria Speck brings a wealth of surprise to grains with her vivid sense of color, and her attention to texture and, of course, to taste. All of these elements come into view in an utterly fresh way. What an innovative book!”
–Deborah Madison, author of Vegetable Literacy and The New Vegetarian Cooking for Everyone

Other praise for Simply Ancient Grains:

M.F.K. Fisher Award winner
One of Bon Appétit's favorite new cookbooks
Named a best new cookbook by Tasting Table
Per Publisher's Weekly, one of the most anticipated new cookbooks by food bloggers
One of the Washington Post's highly recommended cookbooks of 2015
A pick in Huffington Post's holiday gift guide for the food lover
One of Sweet Paul's 24 favorite cookbooks of 2015
Here & Now's (WBUR-FM) favorite cookbook of 2015
One of Fresh New England's top New England cookbooks
One of Take Part's sustainable food gifts you want to buy

Maria Speck is the award-winning author of Simply Ancient Grains, which was selected as a top cookbook for 2015 by the Washington Post, the Huffington Post, and Sweet Paul, as well as on NPR’s Here & Now. It also won an M.F.K. Fisher award, first prize in the book category. Maria’s first cookbook, Ancient Grains for Modern Meals, received multiple awards, among them the coveted Julia Child Award. Both the New York Times and the Washington Post named Ancient Grains a top cookbook, and Cooking Light included it as one of 100 best cookbooks of the past 25 years. Raised in Greece and Germany, Maria has a lifelong passion for whole grains. She is a veteran journalist and food writer and has contributed to numerous publications in both the US and Germany. For more, visit www.MariaSpeck.com
Loading...
or support indie stores by buying on