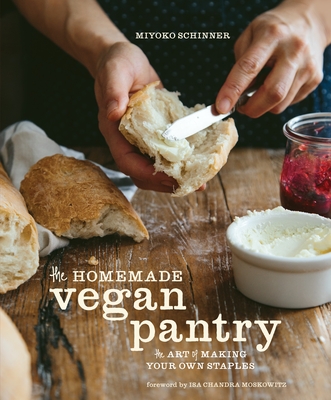 The Art of Making Your Own Staples [A Cookbook]

A guide to creating vegan versions of pantry staples--from dairy and meat substitutes such as vegan yogurt, mayo, bacon, and cheese, to dressings, sauces, cookies, and more.

Kitchen crafters know the pleasure of making their own staples and specialty foods, whether it's cultured sour cream or a stellar soup stock. It's a fresher, healthier, more natural approach to eating and living. Now vegans who are sick of buying over-processed, over-packaged products can finally join the homemade revolution.

The Homemade Vegan Pantry raises the bar on plant-based cuisine, not only for vegans and vegetarians, but also for the growing number of Americans looking to eat lighter and healthier, and anyone interested in a handcrafted approach to food.

Praise For The Homemade Vegan Pantry: The Art of Making Your Own Staples [A Cookbook]…

“Miyoko’s recipes for vegan basics are thoughtfully crafted and the photography is so artistic and inspiring that I can hardly wait to start cooking! It is a beautiful book that would make a great gift for any occasion.”
— Alicia Silverstone, vegan activist, actress, and author of The Kind Diet and The Kind Mama

“Showcasing a mouthwatering array of condiments, stocks, pastas, classic comfort foods, and more, The Homemade Vegan Pantry will show you how fun and delicious it can be to make your favorite food staples at home. Miyoko’s culinary genius shines through in every recipe and the photos are nothing short of sublime!”
— Jason Wrobel, celebrity vegan chef and host of How to Live to 100 on the Cooking Channel

“The Homemade Vegan Pantry makes world-class vegan dishes possible for everyone at every skill level. This is all thanks to Miyoko, a chef who…brings a passion to her recipes that gets both herbivores and omnivores excited.”
— Isa Chandra Moskowitz, author of Isa Does It

"Store-bought vegan foods are aften processed to compensate for nonvegan ingredients, but as chef Miyoko Schinner argues, it's easy to make tasty staples at home, from eggless mayo to pancake mix."
— Time magazine

Entrepreneur for 30+ years in the food world as a bestselling author, chef and creator of delicious, decadent, healthful plant-based food, MIYOKO SCHINNER is dedicated to pleasing the omnivore’s palate in all of us. She refuses to give up on those who haven’t made the switch to plant-based foods and continues to offer progress through the senses, not just the intellect, using diverse avenues. These have included a restaurant and natural food company that distributed products nationwide and supplied cookies and pastries to United Airlines.

Inspiring the general public through her 5 cookbooks, including the best-selling and “groundbreaking” Artisan Vegan Cheese and the just-published The Homemade Vegan Pantry, Schinner also recognizes that not everyone will take up the cause in their own kitchens. To answer this call, in 2014, she launched an artisan vegan cheese company, Miyoko’s Kitchen, which set out to redefine the category of “cheese” with its unctuous, decadent, delicious flavors of handcrafted cheeses made from nuts. Miyoko’s Kitchen currently ships nationwide through ecommerce as well as regular distribution channels, and exports to Australia and Hong Kong.

No stranger to public speaking or media attention, Schinner also co-hosts the national cooking show Vegan Mashup, presents live at major events around the country, and is frequently featured in national and local media.
Loading...
or support indie stores by buying on