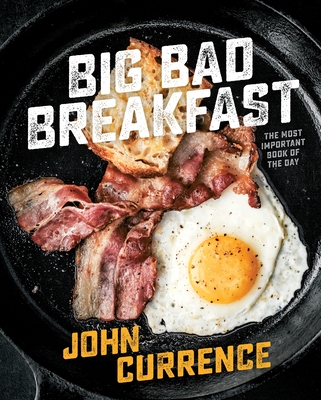 The Most Important Book of the Day [A Cookbook]

From the James Beard Award winner, Top Chef Masters contestant, and acclaimed author comes this fun, festive, and highly caffeinated ode to the joys and rituals of the Southern breakfast, with over 125 recipes inspired by the author's popular restaurant in Oxford, Mississippi.

John Currence is one of the most celebrated and well-loved chefs in the South. Among his string of highly successful restaurants in Oxford, Mississippi, Big Bad Breakfast holds a special place in diners' hearts: It is a gathering place where people from all walks come together to share the most important meal of the day, breakfast. Southerners know how to do breakfast right, and Currence has elevated it to an artform: dishes like Banana-Pecan Coffee Cake, Spicy Boudin and Poached Eggs, and Oyster Pot Pie are comforting, soulful, and packed with real Southern flavor. Big Bad Breakfast is full of delicious recipes that will make the day ahead that much better--not to mention stories of the wonderful characters who fill the restaurant every morning, and a meditation on why the Southern breakfast is one of America's most valuable culinary contributions.

Praise For Big Bad Breakfast: The Most Important Book of the Day [A Cookbook]…

“Big Bad Breakfast is a book you’ll want to read from front to back. John’s humorous stories, from both in and out of the kitchen, plus his approachable Southern-style breakfast recipes, make this a killer cookbook that is not to be missed.”
– Emeril Lagasse

“I am not a breakfast person, yet no food memory will live up to my experience at Big Bad Breakfast. I was in desperate need of comfort (from a hangover and a long flight), sustenance (when you’re in the South, your belly knows it must be fed), and warmth (okay, maybe I’m being dramatic), and Big Bad Breakfast delivered. Was it the sweet, savory, gooey Sausage Cinnamon Rolls or the deeply dirty and delicious waffle-topped Pylon? Or maybe it was the indescribable power of true Southern hospitality. I revel in that meal, and any meal with John at the helm.”
– Christina Tosi, chef-owner of Milk Bar and author of Momofuku Milk Bar

“Mr. Currence won a James Beard award in 2009 for best Southern chef, and it’s possible to eat brilliantly in Oxford for weeks, without repeating a course, in his restaurants alone. In fact I’d recommend this experience . . . . He’s pushing the notions of what Southern food can be, pulling off impressive feats with a casual air of embarrassment.”
– New York Times

“Venerable food writer John T. Edge once told us we couldn’t leave Oxford without stopping by Big Bad Breakfast—and boy, are we glad we listened to him. Chef John Currence is a great cook with a lot of soul.”
– Serious Eats

"Chef-ruler of Oxford, Mississippi, John Currence is here to make the case for breakfast. With recipes from the restaurant that gives this book its title, Big Bad Breakfast offers a vision of mornings spent with Southern heavyweights like oyster pot pie and banana-pecan coffee cake. If you love Eater's Breakfast Week, biscuits, the idea of cinnamon rolls baked with sausage filling, and/or restaurant cookbooks that actually seem cookable, this one's for you."
- EATER NATIONAL

"If you’re the sort of person who gravitates toward diners, whose favorite restaurants serve breakfast all day (we are not talking about McDonald’s), who makes breakfast for dinner at home and whose idea of a good time is making frosted flakes from scratch, then here’s a cookbook for you. Big Bad Breakfast is the new book from John Currence, and it’s a big, bad book of a cookbook. . . . Ed Anderson’s hunger-inducing photography includes repeating plates of pancakes, lots of cast-iron skillets and eggs in various compositions, pouring coffee, Elvis Presley tapestries, biscuit step-by-steps, shots of a baseball-hatted Currence at work in the kitchen or bellied up to a crowded counter. Flip through all this, read the chatty anecdotes (in praise of MSG, the emu egg in the parking lot), and the handy tips from someone who’s worked in many kitchens, both other people’s and his own, and you get a growing sense of comfort — and that’s not just because many of the recipes are for comfort food."
- LOS ANGELES TIMES

"This is a book that earns a spot on your shelf. It is a cookbook of substance, put together with care. Currence has things to teach us: the amount of knowledge on eggs alone is worth the price of the book, ditto the biscuits."
- LUCKY PEACH

John Currence opened City Grocery in Oxford, Mississippi in 1992. Since then, the City Grocery Restaurant Group has opened a number of restaurants, including Ajax Diner, Nacho Mama’s, Kalo’s Tavern, Big Bad Breakfast, Bouré, Lamar Lounge, The Main Event, and Snackbar. Currence is the recipient of the 2009 James Beard Award for Best Chef South and the Southern Foodways Alliance Guardian of the Tradition Award. He has appeared on television programs such as Parts Unknown, Mind of a Chef, Bizarre Foods, Treme, and Top Chef Masters and his writing has appeared in Food & Wine and Bon Appétit, among many others. He is a contributing editor for Garden & Gun magazine, a board member of No Kid Hungry (a project dedicated to eradicating childhood hunger in the United States), and an organizer and past board member of the prestigious annual Southern Foodways Symposium.
Loading...
or support indie stores by buying on