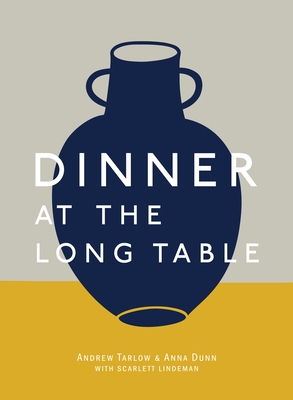 Dinner at the Long Table

From the acclaimed owner of Brooklyn’s Diner, Marlow & Sons, Marlow & Daughters, Reynard, The Ides, Achilles Heel, She Wolf Bakery, Marlow Goods, Roman’s, and the Wythe Hotel comes this debut cookbook capturing a year’s worth of dishes meant to be shared among friends.

Andrew Tarlow has grown a restaurant empire on the simple idea that a meal can somehow be beautiful and ambitious, while also being unfussy and inviting. Personal and accessible, Dinner at the Long Table brings Tarlow’s keen eye for combining design and taste to a collection of seventeen seasonal menus ranging from small gatherings to blow-out celebrations. The menus encompass memorable feasts and informal dinners and include recipes like a leisurely ragu, followed by fruit and biscotti; paella with tomato toasts, and a Catalan custard; fried calamari sandwiches and panzanella; or a lamb tajine with spiced couscous, pickled carrots, and apricots in honey.

Dinner at the Long Table includes family-style meals that have become a tradition in his home. Written with Anna Dunn, the cookbook is organized by occasion and punctuated with personal anecdotes and photography. Much more than just a beautiful cookbook, Dinner at the Long Table is a thematic exploration into cooking, inspiration, and creativity, with a focus on the simple yet innate human practice of preparing and enjoying food together.

Praise For Dinner at the Long Table: [A Cookbook]…

“Andrew Tarlow’s remarkable success as a restaurateur stems from his fundamental love of cooking—and then sharing what he loves with others. Dinner at the Long Table gives that same gift to home cooks. These are winning recipes, each infused with the warmth and joy that make Andrew Tarlow’s soulful restaurants so compelling and memorable.”
—Danny Meyer, CEO, Union Square Hospitality Group

“Andrew’s restaurants are great and I assume these recipes are from there and not from some bad restaurant I don’t enjoy. That would be very odd. I say—purchase this cookbook and quit reading my dumb quote.”
—Aziz Ansari, comedian

“I hate to think that my gluttony (which per se is a sin) causes a cascade of other sins such as environmental problems and animal suffering. Tarlow’s food corrals my gluttony, leaving it just at what it is: a love of eating well.”
—Isabella Rossellini, actress

"This poetic hardcover touches on life, friendship, and the power of good food. Twelve months’ worth of party fare, from green gazpacho to rabbit-chorizo paella, takes the same haute-humble tack as Tarlow’s eateries."
- MODERN FARMER

“Marvelous cookbook. . . . It isn’t restaurant food. Instead, the book is organized by the kinds of meals you fantasize about making for friends, each one tied to a particular season and set in a specific place—read it and you’ll start making mental guest lists.”
—VOGUE

"With nine outer-borough eateries and shops in his portfolio, Tarlow, more than anyone, has been responsible for defining Brooklyn’s artisanal food scene. But perhaps a more pertinent credit on his résumé is that, along with Dunn, he runs the arty food magazine Diner Journal. For never has a cookbook felt more like a literary journal than in this debut effort by the publisher-restaurateurs. Tarlow and Dunn begin with a 10-page poem and photo work entitled “Eat Sunshine” (“bathe in olive oil/take care of strangers”). Next, there are recipes and instructions for creating 17 different feasts or informal dinners. As in a collection of short stories, each piece has a gripping title (“The Tomato and the Sea,” “A Clam for Twelve”), poetic turns, and romantic notions. The “Ragu at the End of Winter” is a three-day affair beginning with a Friday trip to the butcher, a Saturday of browning and simmering, then a Sunday noon pasta course followed by a platter of veal shanks, coppa, ribs, meatballs, sausages and oxtail. A wedding anniversary dinner begins with bouillabaisse condensed to three little words—“Stock. Nuance. Scum.”—and joined by a saffron rouille, olive tapenade, a plate of squid and “fruit as an illusion,” small bowls of poached pears. Photographs, by the Canadian duo Michael Graydon and Nikole Herriott, are not so much instructional as atmospheric. Are we in Williamsburg or Toronto, Marseilles or Rome? This long table has a leg in each."
- PUBLISHERS WEEKLY STARRED REVIEW

"Inasmuch as there is an identifiable Brooklyn aesthetic, so too is there a progenitor. Consider Andrew Tarlow, the owner and operator of a family of Williamsburg properties that includes Diner, Marlow & Sons, Reynard, and the entire Wythe Hotel. He creates casual but impossibly hip settings with better-than-needed food and always some sort of next-level element: a menu scrawled effortlessly on a butcher paper-covered table, beautifully tiled floors, an in-house butchery program. With this debut cookbook, Tarlow and co-author Anna Dunn bring that aesthetic to home cooks, offering up recipes in the context of seasonally inflected menus for gatherings big and small. In other words: Here is a guide to creating the fantasy dinner party of your wildest Brooklyn dreams."
- EATER NATIONAL

"With two handfuls’ worth of successful, quality Brooklyn restaurants likeDiner and Reynard, it’s clear that Tarlow knows a good menu when he sees one. His book offers 17 seasonally focused menus for easy entertaining no matter the occasion, with recipes like roasted leg of lamb and 'beets roasted until the end of time.'"
- TASTING TABLE

"This collection of dinner party menus, from the super casual to the more elaborate, completely charmed me. Some of the dishes here are complicated—there are instructions for making a proper bouillabaisse, for example—but others are just time-sensitive. From time to time, everyone who loves to cook will want spend a chilly day making ragù, right? Long Table captures that spirit."
- EPICURIOUS

"Andrew Tarlow extends the idea of template cooking to constructing a menu itself. The owner of a group of casual, home-style restaurants in Brooklyn including Marlow & Sons and Reynard, Tarlow builds meals just as he would at the restaurant—balancing one big, often long-cooked centerpiece with lots of unfussy sides and appetizers."
- SAVEUR

"Dinner at the Long Table is a DIY guide to conjuring the Tarlow experience at home, partying like a food-savvy Brooklynite: grilling Christmas goose in a snowy brownstone backyard or getting your pals plastered on fernet old-fashioneds. . . You may or may not find the frills and mood-setting endearing, but it’s thrilling that someone is writing books that break from the dry and routine language of most cookbooks. And just like no one would put up with the butcher-paper menus at Diner if the brunch were lousy, no one would cook out of this cookbook if the recipes didn’t work. Thankfully, the dishes in Dinner at the Long Table are killer."
- LUCKY PEACH

In 1999, ANDREW TARLOW opened his first restaurant, Diner, which serves locally sourced, New American food inside a refurbished 1927 dining car in the industrial neighborhood of South Williamsburg, in Brooklyn. Marlow & Sons, a restaurant, oyster bar, and general store soon followed next door, functioning as a cafe by day and a raw bar and restaurant by night. Other culinary ventures include Marlow & Daughters, a butcher shop specializing in locally sourced grass-fed meat; and Roman's in Fort Greene, an Italian-inspired restaurant. In 2012, Andrew and his partners opened the Wythe Hotel and its ground floor restaurant Reynard in a turn-of-the-century factory building in Williamsburg. He most recently opened Achilles Heel, a riverside watering hole in Greenpoint. He is publisher of Diner Journal, an independent magazine featuring original art, literature, and recipes. Tarlow grew up in New York and began his career as a painter and a bartender at the Odeon. He now lives in Fort Greene with his wife, designer Kate Huling, and their four children.

ANNA DUNN has been the editor-in-chief of Diner Journal since its inception in 2006, and a bartender at Diner, Achilles Heel, and Roman’s for just as long. She is co-author of the Saltie cookbook and is hard at work on her first crime fiction novel. She lives in Brooklyn.
Loading...
or support indie stores by buying on