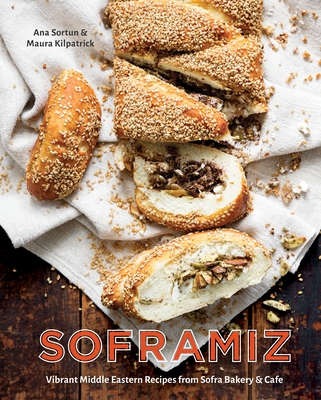 This charming collection of 100 recipes for everyday cooking and entertaining from Cambridge's Sofra Bakery and Cafe, showcases modern Middle Eastern spices and flavors through exotic yet accessible dishes both sweet and savory.

Ana Sortun and Maura Kilpatrick have traveled extensively throughout Turkey and the Middle East, researching recipes and gaining inspiration for their popular cafe and bakery, Sofra. In their first cookbook together, the two demystify and explore the flavors of this popular region, creating accessible, fun recipes for everyday eating and entertaining. With a primer on essential ingredients and techniques, and recipes such as Morning Buns with Orange Blossom Glaze, Whipped Feta with Sweet and Hot Peppers, Eggplant Manoushe with Labne and Za'atar, and Sesame Caramel Cashews, Soframiz will transport readers to the markets and kitchens of the Middle East.

ANA SORTUN graduated from La Varenne Ecole de Cuisine de Paris and opened Oleana in 2001, immediately drawing raves from the New York Times. She was awarded the Best Chef in the Northeast by the James Beard Foundation in 2005, and opened Sofra in 2008.

After receiving a graduate certificate in baking at the California Culinary Academy, MAURA KILPATRICK moved back to her hometown to work for many of Boston's top chefs. In 2001, she worked with Sortun to develop the concept for Oleana, followed by Sofra in 2008. Kilpatrick has earned several nominations from the James Beard Foundation for Outstanding Pastry Chef and the title of Boston's Best Pastry Chef from Boston magazine.
or
Buy Here
Copyright © 2020 American Booksellers Association