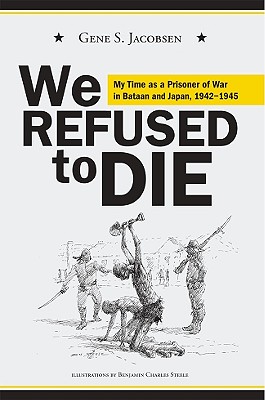 We Refused to Die

Gene Jacobsen was a nineteen-year-old Idaho ranch kid when he decided to join the Army Air Corps in September 1940. By December 1941 he was supply sergeant for the Twentieth Pursuit Squadron at Clark Field in the Philippines. Five months later he was a captive of the Imperial Japanese Army, enduring the Bataan death march and subsequent horrors in the Philippines and Japan. Of the 207 officers and men who made up Jacobsen’s squadron at the beginning of the war, sixty-five survived to return to the United States. We Refused to Die recounts Jacobsen’s struggle, against all odds, to remain one of those sixty-five men.
In engaging, direct prose, Jacobsen’s three-and-a-half year experience as a prisoner of war takes the reader on a brutal and harrowing march through hatred and forgiveness, fortitude and freedom. We Refused to Die is an honest memoir that shines light on one of history’s darkest moments.

"Dr. Gene Jacobsen’s remarkable work, We Refused to Die, is a rare find. Assembled within only months after the author had been released as a POW of the Japanese during World War II, this compelling account has a unique freshness, power, and vividness rarely seen in documentaries of the Pacific Conflict. It is hard to put the book down."—Harold S. Madsen, professor emeritus, Brigham Young University

"One of the most readable and insightful accounts of an American prisoner of war in the entire World War II literature."—Allan Kent Powell, Utah State Historical Society

Gene S. Jacobsen is emeritus professor of education at the University of Utah. He and his wife live in St. George, Utah. He is one of sixteen men still living from the sixty-five members of the Twentieth Pursuit Squadron who returned home.
Loading...
or
Not Currently Available for Direct Purchase