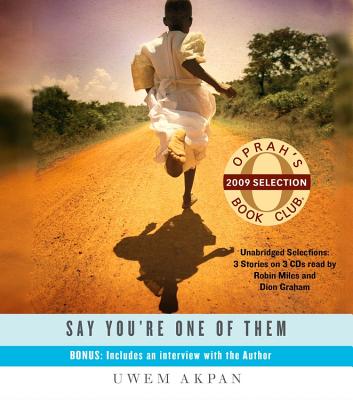 Say You're One of Them Lib/E

Each story in this jubilantly acclaimed collection pays testament to the wisdom and resilience of children, even in the face of the most agonizing circumstances.

A family living in a makeshift shanty in urban Kenya scurries to find gifts of any kind for the impending Christmas holiday. A Rwandan girl relates her family's struggles to maintain a facade of normalcy amid unspeakable acts. A young brother and sister cope with their uncle's attempt to sell them into slavery. Aboard a bus filled with refugees-a microcosm of today's Africa-a Muslim boy summons his faith to bear a treacherous ride across Nigeria. Through the eyes of childhood friends the emotional toll of religious conflict in Ethiopia becomes viscerally clear.

Uwem Akpan's debut signals the arrival of a breathtakingly talented writer who gives a matter-of-fact reality to the most extreme circumstances in stories that are nothing short of transcendent.