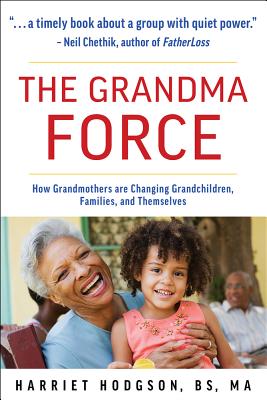 How Grandmothers are Changing Grandchildren, Families, and Themselves

Becoming the grandmother of twins changed Harriet Hodgson and altered her life course. According to Hodgson, we live in a fast-paced, complex time, a time when too many grandchildren are victims of bullying, internet scams, and sexual abuse. Hodgson believes that grandmothers are needed today more than any other time in history. "Grandmas can't be passive," she declares. "Every grandma has the power to protect and guide her grandchildren and needs to tap this power." This narrative weaves Hodgson's personal story with research findings and is packed with ideas for helping grandchildren. "The Grandma Force is about the power of love and the power of one," Hodgson says. "One-by-one, grandmas are standing up for grandchildren and creating a hopeful future for them."

Praise For The Grandma Force: How Grandmothers are Changing Grandchildren, Families, and Themselves…

"The Grandma Force is the most comprehensive book on grandparenting I've ever read. Harriet has researched and referenced every aspect of the grandma relationship and written an aspiring guide for grandmas who want to build a loving, lifelong bond with their grandchildren. Grandmas at every stage will benefit from this book! —Donne Davis, Founder/Director of Gaga Sisterhood website

Harriet Hodgson, BS, MA has been a freelance writer for thirty-eight years. She is the author of thousands of articles and thirty-six books. She has appeared on more than 185 radio talk shows, including CBS Radio, and dozens of television stations, including CNN. She has also been a guest on many BlogTalkRadio programs. A popular speaker, she has given presentations at public health, Alzheimer's, bereavement, and caregiving conferences.
Loading...
or
Not Currently Available for Direct Purchase