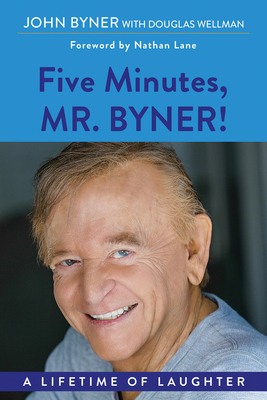 A Lifetime of Laughter

John Byner is a man of many voices and characters, from impersonating the slow, rolling gait and speech of John Wayne, to lending his voice to The Ant and the Aardvark cartoons. His dead-on impersonations, as well as his unique talents as a character actor, have put him on the small screen in peoples' homes, the big screen in theaters, and no screen on Broadway.

Growing up in a big family on Long Island, John discovered his uncanny ability to mimic voices as a child when he returned home from a Bing Crosby movie and repeated Bing's performance for his family in their living room. He discovered his talent made him the focus of everyone's attention, and allowed him to make friends wherever he went, from elementary school to the U.S. Navy.

John started his career in nightclubs in New York, but soon found himself getting national acclaim on The Ed Sullivan Show. With that he was on his way. This memoir is the best and funniest moments of his life, career, and relationships with some of the biggest names in entertainment, both on and off the screen.

Praise For Five Minutes, Mr. Byner: A Lifetime of Laughter…

"An absolute 'must read' for the legions of John Byner fans, Five Minutes, Mr. Byner: A Lifetime of Laughter (written with the assistance of Douglas Wellman and enhanced with an informative Foreword by Nathan Lane) is an inherently fascinating, entertaining and memorable account of a life in show business." —James A. Cox, Midwest Book Review

"So if you have enjoyed watching John Byner since The Ed Sullivan Show, or The John Byner Comedy Hour, or Bizarre, get ready as he once again takes the stage with Five Minutes, Mr. Byner! You’ll be glad you did." —Stuart Nulman, Montreal Times

John Byner's TV career break happened in New York City on Merv Griffin's "Talent Scouts Show" in 1964. After great exposure on both Gary Moore and Steve Allen's variety shows in 1966 and 1967, he clowned around on Ed Sullivan's showcase program over two dozen times and Johnny Carson late-night haunt over three dozen times. He has lent his vocal library of voices to hundreds of cartoons and animated films. Douglas Wellman was a television producer-director for 35 years, as well as the assistant dean of the film school at the University of Southern California. He currently lives in Southern Utah with his wife, Deborah, where he works as a chaplain at a local hospital.
Loading...
or support indie stores by buying on