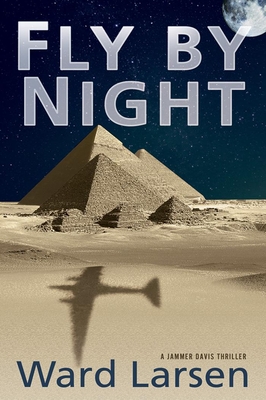 Foreword Book of the Year

A top secret drone crashes in the lawless Horn of Africa. The CIA is prepared to write off the loss until evidence surfaces that the wreckage of their prized aircraft is hidden in a hangar outside Khartoum’s main airport. The hangar is owned by a shady cargo airline that flies ancient DC-3s across Africa and the Middle East. The name of the company does nothing to still concern: FBN—Fly By Night Aviation.

The U.S. government must find out what is in the hangar, and when an FBN airplane crashes, the opportunity arises to send an investigator to get to the bottom of things. Jammer Davis is the NTSB’s biggest headache, but also its best solo operator. He goes to Sudan in the name of solving an air crash, but with the true aim of locating the priceless remains of America’s latest technological marvel.

As Davis enters this inhospitable world, he finds the two disparate mysteries strangely intertwined. True to his nature, Davis barges ahead. Yet everything he finds takes him in reverse, disproving what little he has been given as fact. From Khartoum, to the Sudanese desert, to the Red Sea, Davis is unstoppable. He soon discovers that more is at stake, an incredible conspiracy that will tear the region apart. And one that will threaten America like nothing before.

While all of the novels in the Jammer Davis Series stand on their own and can be read in any order, the publication sequence is:


Praise For Fly by Night: A Jammer Davis Thriller…

“Larsen, a former Air Force fighter pilot who’s flown many combat missions, is a skilled writer who knows his technology, but does not let it overwhelm his story. His latest [Fly By Night] is a solid action novel that will appeal to aviation thriller junkies who enjoy John J. Nance and Dana Haynes.” ―Library Journal

“Larsen clearly knows his military technology, and Jammer Davis is fast becoming one of the leading protagonists in the techno-thriller world. Another winner [Fly By Night] from Larsen that will appeal to fans of Clancy and Flynn.” ―Booklist

“. . . an exciting and relevant read with gripping adventure sure to satisfy fans from many genres.” ―Foreword Reviews

Praise for the Jammer Davis Series

“I love thriller authors who live what they write about. Ward Larsen is an airline captain who also flew combat missions and worked on aircraft accident investigations. In Fly By Wire, he brings his expert background to a gripping, entertaining, informative thriller that feels authentic on every page.” ―David Morrell, New York Times best-selling author

“This book is highly recommended for suspense/thriller readers who want authentic characters and a plot so well written that they immediately want to read it all over again.” —Suspense Magazine

“The descriptions of the crash scene and of Jammer’s investigative work are masterfully done, and there is a superb fight scene or two with Jammer and cohorts.” ―Sacramento Book Review/San Francisco Book Review

Ward Larsen is a USA Today best-selling author and three-time winner of the Florida Book Award. His work has been nominated for both the Edgar and Macavity Awards. A former US Air Force fighter pilot, Larsen flew more than twenty missions in Operation Desert Storm. He also served as a federal law enforcement officer and is a trained aircraft accident investigator. Look for Amber Entertainment's film adaptation of Larsen's first thriller, The Perfect Assassin. His other novels include Stealing Trinity, Fly by Wire, and Passenger 19.
Loading...
or
Not Currently Available for Direct Purchase