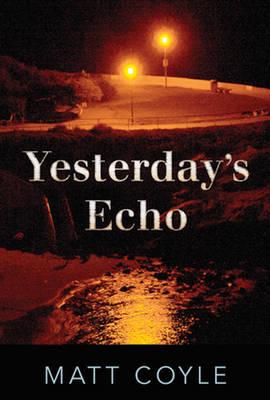 While never convicted of his wife’s murder, Rick was never exonerated either. Not by the police. Not by the media. Not even by himself. Eight years later, police suspicion and his own guilt remain over his responsibility in his wife’s death.

When he meets Melody Malana, a beautiful yet secretive TV reporter, he sees a chance to love again. When she is arrested for murder and asks Rick for help, the former cop says no, but the rest of him says yes and he grasps at a chance for love and redemption.

Rick’s attempt to help turns terribly wrong, and he, too, becomes a suspect in the murder and the target of a police manhunt. On the run, Rick encounters desperate people who will kill to keep their pasts buried.

Before Rick can save himself and bring down a murderer, he must confront the truth about his own past and untangle his feeling for a woman he can never fully trust.

Praise For Yesterday's Echo: A Novel…

“Coyle’s promising debut introduces ex-cop Rick Cahill, a tarnished knight who battles internal and external demons...Cahill turns out to be both tough and resourceful when forced to confront his past. Readers can hope his future will be brighter.” —Publishers Weekly

“Yesterday’s Echo is plotted with a sure hand, and the prose flows fast and crisp like a mountain river. It will captivate you so that you don’t want to put it down, and you don’t want it to end—at least not until the next installment is available.” —Suspense Magazine

“Readers looking for a smart new spin on the classic P.I. novel will find it in Matt Coyle’s terrific debut, Yesterday’s Echo. Coyle turns the difficult trick of paying the proper respect to the traditions of the classic hard-boiled novel while stamping it all with his own distinct, contemporary take.” —Gar Anthony Haywood, author of Assume Nothing

Matt Coyle is the best-selling author of the Rick Cahill PI Crime Series. Yesterday’s Echo is the first in the series and won the Anthony Award for Best First Novel, the San Diego Book Award for Best Mystery, and the Ben Franklin Award for Best New Voice in Fiction. He is a Lefty and Shamus Award-winner and his novels have been nominated for numerous Macavity, Shamus, Lefty, and Anthony Awards. Matt is a graduate of UC Santa Barbara and lives in San Diego with his yellow Lab, Angus.
Loading...
or
Not Currently Available for Direct Purchase