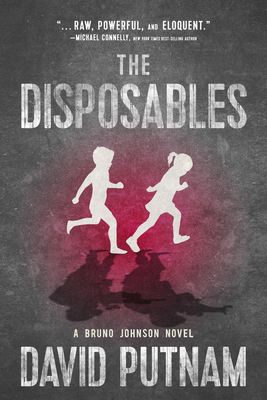 Bruno Johnson, a tough street cop, member of the elite violent crime task force, feared by the bad guys, admired by the good, finds his life derailed when a personal tragedy forces him to break the law.  Now he's an ex-con and his life on parole is not going well.  He is hassled by the police at every opportunity and to make matters even more difficult, his former partner, Robby Wicks, now a high-ranking detective, bullies him into helping solve a high profile crime - unofficially, of course. Meantime, Bruno's girlfriend, Marie, brings out the good, the real Bruno, and even though they veer totally outside the law, he and Marie dedicate themselves to saving abused children, creating a type of underground railroad for neglected kids at risk, disposable kids. What they must do is perilous they step far outside the law, battling a warped justice system and Bruno's former partner, with his own evil agenda.

Praise For The Disposables: A Novel (Bruno Johnson Series #1)…

“For those who crave fast-paced, noir-like thrillers, The Disposables is a novel that won’t disappoint.” — Foreword Reviews

“This novel gives off heat…there are a number of unique and startling plot twists. But what really recommends the book is the high-octane presentation…the occasional clunky sentence doesn’t detract. Rather, they add somehow to the sense of urgency and authenticity, the feeling that this is the real deal, set down by somebody who was there and still hasn’t gotten over it. The SWAT-like assault on the crime house is an impressive set piece.” — Booklist

During his career in law enforcement, David Putnam has done it all: worked in narcotics, violent crimes, criminal intelligence, hostage rescue, SWAT, and internal affairs, to name just a few. He is the recipient of many awards and commendations for heroism. The Squandered is his third Bruno Johnson novel, following the best-selling and critically acclaimed The Disposables and The Replacements.Putnam lives in Southern California with his wife, Mary.