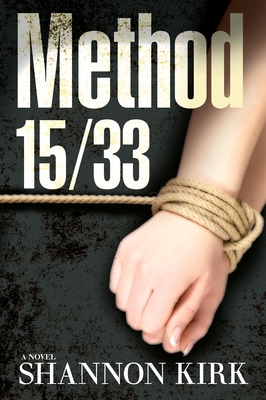 Imagine a helpless, pregnant 16-year-old who's just been yanked from the serenity of her home and shoved into a dirty van. Kidnapped . . . Alone . . . Terrified.

Picture instead a pregnant, 16-year-old, manipulative prodigy. She is shoved into a dirty van and, from the first moment of her kidnapping, feels a calm desire for two things: to save her unborn child and to exact merciless revenge.

She is methodical—calculating—scientific in her plotting. A clinical sociopath? Leaving nothing to chance, secure in her timing and practice, she waits—for the perfect moment to strike. Method 15/33 is what happens when the victim is just as cold as her abductors.

The agents searching for a kidnapped girl have their own frustrations and desires wrapped into this chilling drama. In the twists of intersecting stories, one is left to ponder. Who is the victim? Who is the aggressor?

Perfect for fans of Gillian Flynn and Jeffrey Deaver

“Completely original and totally kick ass! Shannon Kirk pulls no punches in this adrenaline rush of a thriller where the victim is the one to watch, while the kidnappers learn to fear. Loved it!” —Lisa Gardner, New York Times, best-selling author

“Method 15/33 is crowded with fascinating characters but the standout is the kidnapped pregnant teenager. Her captors want her baby. Little do they know they've brought an insanely brilliant, angry, vengeful, borderline sociopath under their roof.” —F. Paul Wilson, New York Times best-selling author

* “Nietzsche warned us to beware of people with a strong desire to punish. That thought lingers after putting down this dark, disturbing, damnably readable novel . . . a worthy challenge, a joy to discuss . . .” —Booklist (Starred Review)

* “Give this to teens who read Stephen King and other psychological thrillers, especially those with a penchant for dark and violent suspense.” —School Library Journal (Starred Review)

“Shannon Kirk’s riveting debut novel, Method 15/33, features kidnapped pregnant teen Lisa Yyland. Readers will see parallels between Lisa and Lisbeth Salander from The Girl with the Dragon Tattoo, both victims who refuse to be victimized . . . Welcome a thrilling new voice in crime fiction.” —The Boston Globe

“What happens when infant traffickers kidnap the wrong pregnant teen? You get Method 15/33, a cross between The Lovely Bones and Silence of the Lambs. Shannon’s debut thriller is a dark, literate page-turner, utterly compelling.” —Leonard Rosen, award-winning author

“Kidnapped, close to death, and about to give birth, this thriller’s brilliant and slightly sociopathic protagonist is determined not only to save herself and her baby, but also to exact a horrible revenge on her captors. A gripping, unsettling work with a young woman who is unrelenting in her single-minded pursuit of her mission.” —Best Adult Books 4 Teens, School Library Journal

“Method 15/33 takes us to some very dark places, and at times, we can’t help but wonder whose soul is the darker—the captor’s or the captive’s . . .” —Mystery Scene

Best-selling author Shannon Kirk is a practicing attorney and a law professor. She attended West Virginia Wesleyan and St. John’s Universities, is a graduate of Suffolk Law School, and was a trial lawyer in Chicago prior to moving to Massachusetts. Her novels have won numerous awards and Method 15/33, her debut novel, has been translated into more than 20 languages. She lives in Massachusetts with her husband, a physicist, and their son.
Loading...
or
Not Currently Available for Direct Purchase