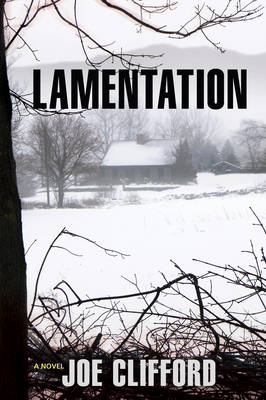 How much should one brother sacrifice for another?

In a frigid New Hampshire winter, Jay Porter is trying to eke out a living and maintain some semblance of a relationship with his former girlfriend and their two-year-old son. When he receives an urgent call that Chris, his drug-addicted and chronically drunk brother, is being questioned by the sheriff about his missing junkie business partner, Jay feels obliged to come to his rescue.

After Jay negotiates his brother’s release from the county jail, Chris disappears into the night. As Jay begins to search for him, he is plunged into a cauldron of ugly lies and long-kept secrets that could tear apart his small hometown and threaten the lives of Jay and all those he holds dear.

Powerful forces come into play that will stop at nothing until Chris is dead and the information he harbors is destroyed.

“Clifford paints true-to-life characters with the same gritty touch as the best of Dennis Lehane. Straightforward and edgy, Lamentation gnaws with nail-biting tension on every page. A must-read for contemporary hardboiled mystery fans who appreciate the type of terse dialogue and real-life conflicts and settings Elmore Leonard so richly brought to life.” —Robert Dugoni, New York Times best-selling author

“Some books live on in your mind long after you put them down, and Lamentation is one of them. The novel’s perfectly constructed plot unfolds with the thoughtful precision and menace of a cat burglar. The pervasive atmosphere of psychological suspense ratchets up a notch with each page turned. Joe Clifford’s talent is exceptional.” —Hilary Davidson, author of Blood Always Tells

“This tale of small-town secrets and the troubled, unfathomable, unbreakable bond of brothers reminded me of Scott Smith’s A Simple Plan—high praise. Joe Clifford is a talent to be recognized.” —David Corbett, award-winning author of The Mercy of the Night

Award-winning author Joe Clifford has been a homeless junkie living on the street—until he turned his life around. Now, he uses the backdrop of his experience with addiction to shine a light on the misunderstood and marginalized. No one can write with the authority of Joe Clifford when describing the reality of alcohol and drug abuse. Lamentation is the first novel in his award-winning Jay Porter Series. December Boys, Give Up the Dead, Broken Ground, and Rag and Bone follow. Joe lives in the San Francisco Bay Area with his wife, Justine, and two sons.
Loading...
or support indie stores by buying on
(This book is on backorder)