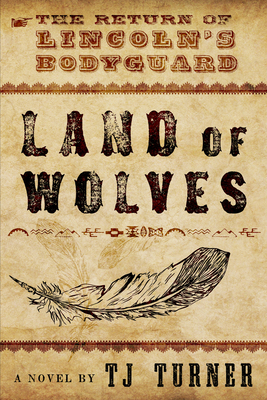 The Return of Lincoln's Bodyguard

Land of Wolves finds Joseph Foster with Molly as they settle into a newfound life in the hills of Tennessee. But Abraham Lincoln’s former bodyguard, the man who saved the President’s life, cannot escape the Consortium as they come roaring back, killing his mother, abducting his daughter—all to coerce his Congressional testimony on their behalf.

Instead, Joseph and Molly strike the Consortium in their own safe haven of New York City. In a Bonnie and Clyde-like twist, they rob from the Consortium to draw out their leader—General Dorsey. But the hidden plan reveals more than they counted on, exposing the true intention to steal the Black Hills and the gold underneath from the Lakota Sioux. Land of Wolves traverses the American landscape, where only a full reconciliation with Joseph’s native heritage and a cast of characters ripped from history—including Lincoln—can bring true peace and stop General Dorsey and the evil Industrial Consortium.

While the novels in the Lincoln’s Bodyguard Series stand on their own and can be read in any order, the publication sequence is:

Lincoln’s Bodyguard
Land of Wolves
Angel in the Fog


Praise For Land of Wolves: The Return of Lincoln's Bodyguard…

“A wonderfully imagined world of 'what might have been, if only if.’ The chemistry between the characters sparkles, the treachery comes from all directions, and the story moves with a wry, appealing voice. It’s one delicious tale.” —Steve Berry, New York Times best-selling author

“Turner’s second alternative history featuring Joseph Foster (after 2015’s Lincoln’s Bodyguard) provides an imaginative answer to the question he poses in an author’s note: “What would America have looked like if our greatest president had lived?” —Publishers Weekly

“ . . . the story is almost cinematic in its construction and execution. Terrific fun and perfect reading for fans of alternate-history adventures.” —Booklist

“In this deft and brilliant reimagining of history, TJ Turner mines the best of old-school detective fiction to bring a wild new version of Lincoln, the Civil War and its aftermath to life.” —Joe Clifford, award-winning author of the Jay Porter Series

“This novel [Lincoln’s Bodyguard] provides a new take on a fascinating question: what would America have been like if Lincoln had lived? TJ Turner provides an intriguing answer—one that reaffirms something I firmly believe—history matters.” —Steve Berry, New York Times best-selling author

“Suspenseful and rich with historical detail, Angel in the Fog by TJ Turner brings the Civil War to fire-breathing life. A young prostitute’s discovery of a conspiracy to murder president-elect Abraham Lincoln sets her on a daring path to help the Pinkerton agency save the president’s life, and soon she becomes one of America’s first female private detectives.” —Gayle Lynds, New York Times best-selling author