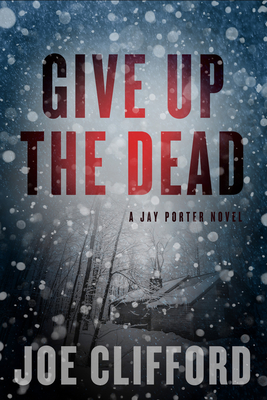 Give Up the Dead

Anthony Award Nominee for Best Novel in a Series

A brother’s love knows no bounds—even in death

Three years have passed since estate-clearing handyman Jay Porter almost lost his life following a devastating accident on the thin ice of Echo Lake. His investigative work uncovering a kids-for-cash scandal may have made his hometown of Ashton, New Hampshire, a safer place, but nothing comes without a price. The traumatic, uncredited events cost Jay his wife and his son, and left him with a permanent leg injury.

Jay is just putting his life back together when a mysterious stranger stops by with an offer too good to be true: a large sum of cash in exchange for finding a missing teenage boy who may have been abducted by a radical recovery group in the northern New Hampshire wilds.

Skeptical of gift horses and weary of reenlisting in the local drug war, Jay passes on the offer. The next day his boss is found beaten and left for dead, painting Jay the main suspect. As clues begin to tie the two cases together, Jay finds himself back on the job—and back in the line of fire.


Praise For Give Up the Dead: A Jay Porter Novel…

“Joe Clifford is an underground star. Give Up the Dead should finally expose his star to the light. Jay Porter is a hard-bitten and hard-boiled loner who manages to make you root for him and all the world's underdogs.” — Reed Farrel Coleman, New York Times best-selling author

“Noir fiction has fresh blood in Joe Clifford. The three-dimensional characters in Give Up the Dead take readers by the hand and throat and don't let go until the final shocking pages.” —Eileen Cook, best-selling author

“There is something incredibly fascinating about an unconventional hero whose life is on the verge of unraveling at any moment. Joe Clifford's propulsive third installment starring Jay Porter, a flawed but surprisingly thoughtful and self-aware protagonist, kept me turning the pages long into the night.” —Jennifer Hillier, author of Wonderland

“In my humble opinion, Joe Clifford is the best storyteller working today. His third installment of the Jay Porter series ratchets up the heat on Jay and the reader and what follows is a fast-paced ride . . . and intricately plotted story line.” —Pam Stack, Authors on the Air

“The depth of the characters. The vividness of the New Hampshire winter setting. The importance of the novel's theme. Joe Clifford’s a crime writer to pay attention to.” —David Morrell, New York Times best-selling author​​​​​​

Award-winning author Joe Clifford has been a homeless junkie living on the street—until he turned his life around. Now, he uses the backdrop of his experience with addiction to shine a light on the misunderstood and marginalized. No one can write with the authority of Joe Clifford when describing the reality of alcohol and drug abuse. Give up the Dead is the third novel in his award-winning Jay Porter Series following Lamentation and December Boys and is followed by Broken Ground and Rag and Bone. Joe lives in the San Francisco Bay Area with his wife, Justine, and two sons.
Loading...
or
Not Currently Available for Direct Purchase