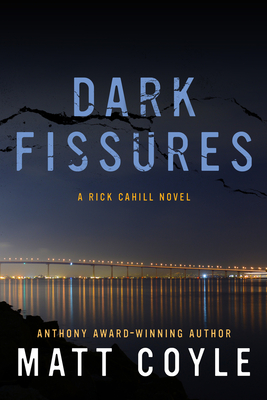 Finalist for the Macavity and Lefty Award

Private Investigator Rick Cahill fears the next knock on his door will be a cop holding a warrant for his arrest. For murder. La Jolla Chief of Police Tony Moretti is convinced Rick killed a missing person. No body has been found, but the evidence that’s piling up says murder and it all points to Rick. With Moretti on his tail and the bank about to foreclose on his house, Rick takes a paying case that will stave off the bank, but pits him against Moretti and the La Jolla Police Department.

Brianne Colton, a beautiful country singer, is convinced her estranged husband’s suicide was really murder. Rick is unconvinced, but the mortgage has to be paid. Each new piece of evidence convinces him she’s right. He breaks his number one rule and falls for Brianne even, as he begins to question her motives.

As Moretti cinches the vise tighter, with Rick unable to trust the FBI, evil forces emerge from the shadows who will do anything, including torture and murder, to stop Rick from uncovering the truth.

“I think I'm falling for Rick Cahill. He's the best kind of down-on-his-luck detective: hard-boiled yet vulnerable; gritty but gallant; somewhat of a screw-up but noble to the core; droll yet all heart. I'll follow him anywhere.” —Kristi Belcamino, Anthony, Barry, and Macavity Award nominee

“The deck is stacked against Cahill, but he comes up trumps by the end of this satisfying hard-boiled adventure.” —Publishers Weekly

“Those who enjoy gritty crime dramas will like Cahill and appreciate Coyle’s writing style. Though this is the third in the series, Dark Fissures is a great place to start.” —Booklist

“If you like tight, fast, dark thrillers, you'll do well to follow Coyle into the dark fissure that runs through Cahill's soul.” —Suspense Magazine

“Matt Coyle's protagonist, Rick Cahill, is haunted both by the sins of his father and by his own mistakes—but he's driven to find the truth, no matter where it takes him, and that's what makes this story so compelling.” —Steve Hamilton, New York Times best-selling author

Matt Coyle is the best-selling author of the Rick Cahill PI Crime Series. Dark Fissures is the third in the series and was a finalist in both the Lefty and Macavity Awards. His novels have won the Anthony, the Lefty, and the San Diego Book Award, and have been nominated for numerous Anthony, Macavity, Shamus, and Lefty Awards. Matt is a graduate of UC Santa Barbara and lives in San Diego with his yellow Lab, Angus.
Loading...
or
Not Currently Available for Direct Purchase