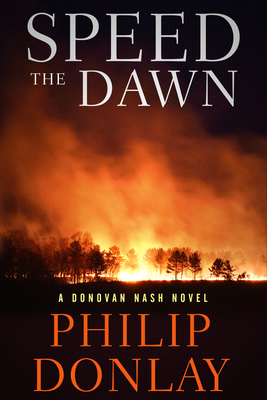 Hundreds of white-hot meteor fragments plunge toward Earth near Monterey Bay, California. Huge fires ignite the tinder-dry landscape and, as the sun sets, the power grid collapses and the fires grow, illuminating a nightmare created in hell itself. Donovan Nash realizes he is trapped.

Injured and growing desperate, his options dwindling, Donovan fights to keep himself and a small band of survivors alive until dawn, when they can make one last attempt to escape the inferno.

Meanwhile, Donovan's wife, Dr. Lauren McKenna, working with the Pentagon as well as the Forest Service, envisions a bold approach to stop the fire from spreading all the way to the Bay Area and the seven million residents living there. She's terrified that, if not executed perfectly, her plan could cause the death of thousands of people—including Donovan.

In the style of Clive Cussler, best-selling author Philip Donlay climbs to a new height of terror in his 8th Donovan Nash thriller


Praise For Speed the Dawn (A Donovan Nash Thriller #8)…

“Authors like Philip Donlay, who write the pure thrillers, have capabilities and strength I can only envy. Great pacing and twists. Bravo!” —William Kent Krueger, Edgar Award-winning and New York Times best-selling author

“[Deadly Echoes] is a heart-thumping ride that steams along, bringing our flawed world into pristine focus. Lots of mischief and mayhem, the characters fraught with danger, the plot hitting all the right notes.” —Steve Berry, New York Times best-selling author

“Fast paced, spellbinding, and packed with exhilarating thrills and chills, Speed the Dawn is a well-written and electrifying novel.” —New York Journal of Books

“This is a story so energetic and realistically portrayed that smoke seems to drift from the book’s pages. With whirlwind, high-tension action, Speed the Dawn is a quintessential disaster novel and a high-concept thriller.” —Foreword Reviews

“Nonstop action with a scientific base from the reliably readable Donlay.” —Booklist

“If you want to experience terror, this is where to get it. Donlay is a fantastic writer … so emotional and vibrant with his words. [Donovan Nash] is one character who continues to get better and better as time moves forward.” —Suspense Magazine

Best-selling author Philip Donlay has been a flight instructor, flown a private jet for a Saudi prince, and for twenty-eight years flew a corporate jet for a Fortune 500 company. His travels have taken him to over forty countries on five continents. He divides his time between Montana and the Pacific Northwest. Speed the Dawn is his eighth thriller in the award-winning Donovan Nash Series.
Loading...
or
Not Currently Available for Direct Purchase