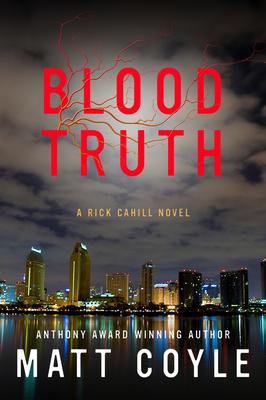 Rick Cahill has long feared the truth about his own blood—the blood of his father coursing through his veins.

When a long-hidden safe unlocks clues about why his father was kicked off the police force twenty-seven years ago and then spiraled into an early drunken death, Rick determines to find the truth even if it proves the one thing he’s always feared.

But as he grapples with his father’s past, the woman he still loves pleads with him to find out if her husband is having an affair—or is involved in something much more sinister. Could the truth send her back into Rick’s arms? Would he have a last shot at happiness?

He may never get the chance to find out, as killers who will do anything to protect their secrets lurk in the shadows.

“Blood Truth is tough, savvy, and emotionally nuanced. With an intriguing plot, engaging characters, and rich sense of place, Matt Coyle honors the PI tradition while also making it his own.” —Lou Berney, Edgar, Anthony, Barry, and Macavity Award-winning author

“Cahill is a fantastic addition to the PI literary canon. He’s a sympathetic character with deep flaws but an unnerving drive to find truth at any cost . . . Expertly written and featuring a snarky and self-deprecating hero, Blood Truth builds up compelling mysteries and thunders toward a satisfying, if surprising, ending.” —Foreword Reviews (Starred Review)

“Each of the series raises the hardboiled thriller bar, but this multifaceted Chandler-like installment rockets that measure to Himalaya heights.” —L. Dean Murphy, Bookreporter

“Sharp, suspenseful, and poignant, Lost Tomorrows hits like a breaking wave and pulls readers into its relentless undertow. Matt Coyle is at the top of his game.” —Meg Gardiner, Edgar Award-winning author​​​​​​

Matt Coyle is the best-selling author of the Rick Cahill PI Crime Series. Blood Truth is the fourth in this award-winning series. His novels have won the Anthony, the Lefty, the San Diego Book Award, among others, and have been nominated for numerous Anthony, Macavity, Shamus, and Lefty Awards. Matt is a graduate of UC Santa Barbara and lives in San Diego with his yellow Lab, Angus.
Loading...
or
Not Currently Available for Direct Purchase