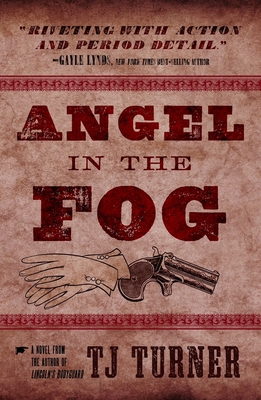 Plucked from a personal hell, Molly Ferguson—now a Pinkerton agent—ventures far behind enemy lines in the Deep South to spy for the Union

Molly Ferguson’s comfortable life unravels when her Louisiana home is burned to the ground, her family murdered, and she is enslaved in a Baltimore brothel. Amidst the threat of the Civil War, Molly learns of secessionist plans to assassinate President-elect Abraham Lincoln as he makes his way to Washington for his inauguration. She manages to pass this information on to a Pinkerton agent posing as a client.

Impressed with her fortitude and intelligence, the Pinkerton Agency arranges for Molly’s freedom and brings her under the tutelage of Mrs. Kate Warne, America’s first female detective. After they save Mr. Lincoln in Baltimore, Molly is sent by the Pinkerton Agency into the Deep South—where the Civil War now rages—a spy behind enemy lines.

Molly threads a thin line between revenge and redemption as she races to unravel a sinister plan that will doom the Union and allow the Confederacy to win the Civil War—while coming face to face with the demons from her tragic past.

Praise For Angel in the Fog (Lincoln's Bodyguard Series #3)…

“Suspenseful and rich with historical detail, Angel in the Fog by TJ Turner brings the Civil War to fire-breathing life. A young prostitute’s discovery of a conspiracy to murder president-elect Abraham Lincoln sets her on a daring path to help the Pinkerton agency save the president’s life, and soon she becomes one of America’s first female private detectives. This is a grand yarn that will rivet you to your reading chair.” —Gayle Lynds, New York Times best-selling author

“In TJ Turner's Angel in the Fog, we're in for a heart-stopping, page-turning, and thrilling story as we follow the exploits of Molly—a feisty, fascinating, and fierce heroine if ever there was one. But there's more to Molly's story than excitement. It's an insightful exploration of the resourcefulness of the human heart when tested by the most difficult of circumstances—and, ultimately, the redemptive power of forgiveness.” —Jess Montgomery, author of The Widows

“This novel [Lincoln’s Bodyguard] provides a new take on a fascinating question: what would America have been like if Lincoln had lived? TJ Turner provides an intriguing answer—one that reaffirms something I firmly believe—history matters. This is a delightful romp through an alternate history with an ending that catches you by surprise. It's a fully immersive world that sweeps you in and never lets you go.” —Steve Berry, New York Times best-selling author

“The plot twists of this imaginative what-if will keep readers guessing.” —Publishers Weekly

“[Land of Wolves] is almost cinematic in its construction and execution. Terrific fun and perfect reading for fans of alternate-history adventures.” —Booklist

TJ Turner is an award-winning novelist, a historian, a research scientist, and a federal agent. He has a PhD in Mechanical Engineering and Material Science from Cornell University. As a reserve military officer, he served three tours in Afghanistan and was twice awarded the Bronze Star Medal (2013 and 2017). Angel in the Fog is Turner’s third novel and a prequel to Lincoln’s Bodyguard and Land of Wolves. Turner’s novels have won the Darrell Award for Best Mid-South Novel, the International Book Award for Historical Fiction, the Best Book Award for Historical Fiction, the Military Writers of America Gold and Silver Medals, and the National Indie Excellence Award for Historical Fiction. Turner lives in central Ohio, with his wife, Nancy, and three children.
Loading...
or
Not Currently Available for Direct Purchase