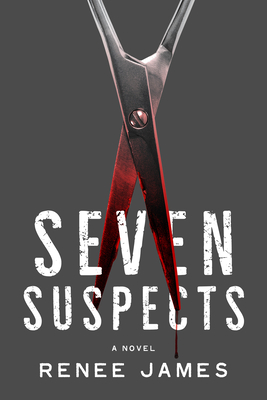 Bobbi Logan is a successful businesswoman and a celebrated hairdresser. She is a witty, articulate woman who has survived rape, gender transition, a murder investigation, and countless acts of bullying and bigotry to get where she is—and she's made enemies along the way. Now one of them is stalking her. With each passing day, the threats become more brazen, more violent, and more personal. No one knows who here stalker is or why he's after her, but he's getting closer every day.

Bobbi is intimidated but she has vowed to never be the victim again. She accumulates a list of six suspects, and with courage and persistence, she hunts them down, one by one—stalking her possible stalkers. But as she confronts those men who may want to do her harm, the number seven keeps haunting her—there must be a seventh suspect.

And when she finds him, Bobbi’s world implodes.

"If you love Bobbi Logan—and I do—Seven Suspects is a hard read at times. Our girl is in peril and James pulls no punches. But I still couldn't put it down: Bobbi on a quest, with nothing but her courage, her one-liners, and a can of mace to protect her, is irresistible. This is a book with a heart as big as Bobbi's own, more twists than her fanciest up-do and a love letter to Chicago thrown in for kicks. Read it!" — Catriona McPherson, Lefty Award winner and Agatha Award nominee

"Renee James’s Bobbi Logan is a unique voice in mystery, at once feisty, strong, sexy but vulnerable—in other words, feminine. Seven Suspects is a taut story that takes Bobbi deep into an earned paranoia that someone is watching her every move. They are, and in the end, Bobbi will have to transform into another better version of herself to fight for her life." — Lori Rader-Day, Mary Higgins Clark Award- and Anthony Award-winning author

"Meet Renee James’ Bobbi Logan, a fierce, funny, and fearless transgender woman taking on Chicago and a mysterious stalker that is closing in on her. But that stalker has no idea what’s in store, because Logan doesn’t run from anything—and she turns tables and begins to hunt the stalker, resulting in an explosive, hair-raising ending. Fans of The Girl with the Dragon Tattoo series will love Seven Suspects. It catches you from the first page, with a unique voice and twisting mystery written with frank and sometimes brutal honesty. James is a compelling and elegant writer, and a must read for any mystery fan." — Jamie Freveletti, internationally best-selling and award-winning author of Dead Asleep

“… readers are sure to cheer for the brave, resolute Bobbi … a novel with a great protagonist.” — Publishers Weekly

“Bobbi is an appealing character: funny, profane, and angry … The Chicago setting and supporting characters are well drawn, while the glimpse into trans life is revelatory.” — Library Journal

“In no other work of fiction can readers hear the real voice of a trans woman who still struggles with her identity … Seven Suspects [is] a truly enjoyable read. The book is funny, frightening, mysterious, and familiar all at the same time. There is a voice and a perspective that seeps into every corner of the book.” — Windy City Times

“The ending and the denouement leave the reader surprised, satisfied, and prepared to follow Bobbi’s character into the next installment in the series.” — Killer Nashville

“The crime fiction world needs a character like Bobbi Logan and Renee James is the perfect author to bring her to life.” — Bolo Books

“Humor, suspense, being made aware of how good friends are such a valuable commodity, a touch of romance, and a good look at the world at large makes this an enjoyable read.” — BookLoons

Renee James is the pen name of a Chicago-area transgender writer. In her male identity, James has been a full-time freelance writer following a long career as a magazine editor and owner. James has won dozens of awards for journalistic excellence and authored a biography. As Renee James, she has authored Transition to Murder, which won the Chicago Writers Association Indie book of the year and was a bronze medalist in Foreword Book Reviews, and A Kind of Justice. Seven Suspects is her third novel. James is a spouse, parent, and grandparent. She is also a Vietnam veteran, licensed hairdresser, and wilderness adventurer. She has struggled with gender identity issues since childhood but never let her gender define her. Instead, she has worked to define herself according to her human values and what she does with her life.
Loading...
or
Not Currently Available for Direct Purchase