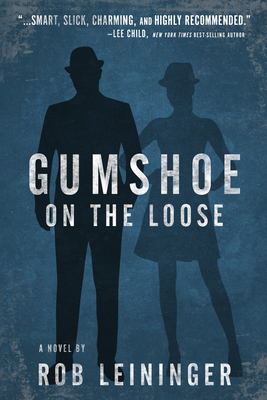 Gumshoe on the Loose (The Mortimer Angel Series)

IRS agent-turned-PI Mortimer Angel is relaxing in a hole-in-the-wall bar in a Reno casino when an attractive young girl hires him to find out who left her a cryptic message demanding a million dollars.

At the girl’s house, Mort finds the body of missing rapper Jonnie Xenon—Jo-X to his legions of fans—hanging from the rafters with two bullet holes in him. Mort is shocked when he learns the identity of the girl’s father—and even more shocked when he is hired to investigate the murder.

Mort, being Mort, accumulates a few felonies as he follows the clues to Las Vegas. And along the way, he picks up an alluring young assistant who changes his life—in every conceivable way.

The perfect mix of John Sanford and Carl Hiaasen


Praise For Gumshoe on the Loose (The Mortimer Angel Series)…


“Outstanding! From its opening line to its satisfying denouement, Rob Leininger's Gumshoe in the Dark is a tightly plotted, deftly executed, wickedly funny, and wildly entertaining story. Find a comfortable chair and enjoy a ride through the backroads of Nevada.” —Sheldon Siegel, New York Times best-selling author


“Gumshoe, the first in the series, was a Shamus nominee, and the author continues to develop Mort’s character and his snappy repartee. Readers who loved Robert B. Parker’s Spenser or Matt Goldman’s Nils Shapiro will appreciate the humor and investigative work in this outstanding example of the PI novel.” —Library Journal (Starred Review)


“Gumshoe Rock is a knock-your-socks-off mystery with a healthy dose of graveyard humor.” —Foreword Reviews


“Fans of Travis McGee hungry for red-meat private-eye adventure will tune out the mystery and focus on the hero’s effortlessly self-confident sex appeal, superhuman physical strength, and nice way with dialogue.” —Kirkus Reviews


“Once this novel is picked up, the reader will be reluctant to put it down . . . bring on the next adventure, Mr. Leininger. We’ll be waiting!” ―New York Journal of Books

USA Today best-selling author Rob Leininger grew up in California prior to joining the Navy. Leininger served aboard heavy cruisers during the Vietnam War and also at McMurdo Station in Antarctica. He received a mechanical engineering degree from the University of Nevada, Reno, and worked on Trident missiles for Hercules, and “black” defense projects for Northrop Corp.

Gumshoe on the Loose is the third novel in Leininger’s Gumshoe Series, featuring PI Mortimer Angel. Gumshoe, the first in the series, was nominated for the Shamus Award for Best PI Novel and was a finalist for the Foreword Book of the Year Award. Gumshoe for Two, Gumshoe Rock, and Gumshoe in the Dark complete the series to date. Leininger lives with his wife in northwest Montana.