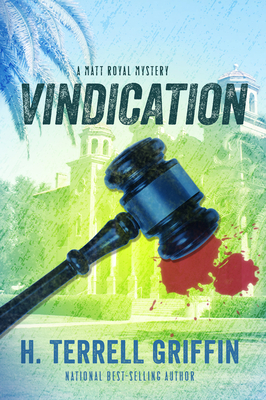 In this John Grisham style mystery, Matt Royal, the retired lawyer-turned-beach-bum is called back into the courtroom to defend his girlfriend J.D. Duncan's Aunt Esther, who lives in the sprawling North Central Florida retirement community of The Villages. A best-selling author has been murdered after a book signing, and Aunt Esther has been arrested. Matt has a history with the local sheriff—one which may not bode well for his client.

Matt reluctantly suits up for the courtroom, and J.D. takes a leave from the police department to go undercover. A bizarre specter from the past haunts their investigation every step of the way.

As they delve further into the case, the pieces of the puzzle refuse to fall into any kind of coherent pattern. Jock Algren arrives with his special skill set to expose the real murderer and free Aunt Esther, but to no avail.

Not until the case goes to trial and the evidence is revealed does the truth emerge—and a strange kind of justice prevails.

H. Terrell Griffin, a former trial lawyer and soldier, is the award-winning and best-selling author of the Matt Royal Mystery Series set on the Florida Gulf Coast island of Longboat Key, and Vindication, set in The Villages of Central Florida. His novels have repeatedly been compared to John D. MacDonald for their setting, character, and style. Vindication follows Blood Island, Wyatt’s Revenge, Bitter Legacy, Collateral Damage, Fatal Decree, Found, Chasing Justice, and Mortal Dilemma.
Loading...
or support indie stores by buying on