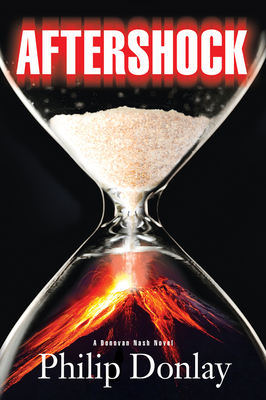 The flames of Donovan Nash’s worst nightmare are fanned to life when Stephanie VanGelder, one of those closest to him, is kidnapped in the volcanic powder keg of a lawless Guatemala. With help from his inner circle that includes his estranged wife, Dr. Lauren McKenna, Donovan races headlong into the world of corruption and deception. Battling the kidnappers, as well as the deadly gas and lava from the impending eruption of a volcano, Donovan only has one chance to save Stephanie.

Amid earthquakes, volcanic ash, and lava from the eruption, the rescue goes horribly wrong, and Donovan is forced to find a way for everyone, including a mysterious woman who holds the secrets to his past, to escape one of the most powerful forces on earth.

Aftershock is the story of Donovan Nash, a man battling his torturous past, while struggling to survive the volcano along with those who matter most to him. In the face of impending death, Donovan must garner the courage to endure a shocking revelation he’s sought for decades―a truth that will change him forever.

“The action races to a shoot-out on the shores of Lake Atitlán and a desperate flight through a volcanic eruption as Mt. Atitlán rips itself apart. Donlay keeps things moving too fast for readers to get bored . . .” —Publishers Weekly

“This personal angle gives the story an emotional core, and a rumbling volcano sets the time clock on suspense and leads to a frantic turning of pages.” —Booklist

“The action ping-pongs back and forth as Nash’s rescue and McKenna’s investigation proceed—until events collide as the volcano erupts.” —Suspense Magazine

“Donovan Nash is back—and is he ever! Tense action, crisp dialog, and cool high-tech toys drive the story. Oh, and there’s even an erupting volcano.” —D. P. Lyle, best-selling and award-winning author

“Well researched and supremely entertaining, Philip Donlay has knocked this one out of the park!” —Ward Larsen, USA Today best-selling author​​​

Best-selling author Philip Donlay has been a flight instructor, flown a private jet for a Saudi prince, and a corporate jet for a Fortune 500 company. His travels have taken him to over forty countries on five continents. He divides his time between Montana and the Pacific Northwest. Aftershock is his fifth thriller in the Donovan Nash Series following Category Five, Code Black, Zero Separation, Deadly Echoes and preceding Pegasus Down, Seconds to Midnight, and Speed the Dawn.
Loading...
or
Not Currently Available for Direct Purchase