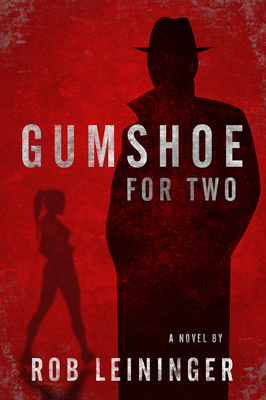 Ex-IRS agent turned gumshoe-in-training, Mortimer Angel, is approached by a beautiful hooker, Holiday, in a casino bar in Reno. Mort first met Holiday two months ago, but now learns that she’s not really a hooker. She’s a college engineering student, searching for her younger sister, Allie, who disappeared three months ago. Having seen Mort in the news, Holiday knows he’s a PI who finds missing persons. While in the bar with Mort, Holiday gets an unexpected phone call from Allie who says she’s in Gerlach, a small town in Nevada. The call is cut off. Holiday hires Mort on the spot, dragging him off to Gerlach. When Mort finds a connection between Allie and US Senator Harry “Liar” Reinhart, a presidential candidate who vanished without a trace three days ago, things quickly turn deadly—very deadly.

"Gumshoe for Two is smart, sexy, and un-put-downable. Another in a long line of winners from Rob Leininger. Mortimer Angel is my new favorite private eye." — John Lescroart, New York Times best-selling author

Rob Leininger grew up in California before joining the navy. He served aboard heavy cruisers during the Vietnam War and also at McMurdo Station in Antarctica. He received a mechanical engineering degree from the University of Nevada and worked on Trident missiles for Hercules, and “black” defense projects for Northrop Corp. Leininger’s novels Black Sun and Killing Suki Floodhave been optioned for feature films by Warner Bros.  Before deciding to write full time, Leininger taught high school math in Reno, Nevada, where he now lives.