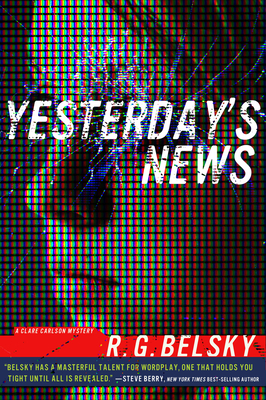 “Tell me what happened to my daughter?” For fifteen years this anguished plea has haunted reporter Clare Carlson

When eleven-year-old Lucy Devlin disappeared on her way to school more than a decade ago, it became one of the most famous missing child cases in history.

The story turned reporter Clare Carlson into a media superstar overnight. Clare broke exclusive after exclusive. She had unprecedented access to the Devlin family as she wrote about the heartbreaking search for their young daughter. She later won a Pulitzer Prize for her extraordinary coverage of the case.

Now Clare once again plunges back into this sensational story. With new evidence, new victims, and new suspects—too many suspects. Everyone from members of a motorcycle gang to a prominent politician running for a US Senate seat seem to have secrets they’re hiding about what really might have happened to Lucy Devlin.

But Clare has her own secrets. And in order to untangle the truth about Lucy Devlin, she must finally confront her own torturous past.

Perfect for fans of Robert Crais and Harlan Coben

“Belsky’s Yesterday’s News elicits all parents’ deepest fear—the disappearance of a child. But this intelligent, gripping novel is about so much more: ambition, secrets, and, most shocking of all, truth.” —Reed Farrel Coleman, New York Times best-selling author

“What a terrific book! A complex and compelling nonstop cat-and-mouse chase—and you're never quite sure which one's the mouse. Even the savviest of readers will be gasping in awe at Belsky's impressive story-telling skills.” —Hank Phillippi Ryan, Agatha, Anthony, and Mary Higgins Clark Award-winning author

“Below the Fold is a terrific mystery, written with a veteran journalist's eye. The pacing and plotting are everything you want, but it's R. G. Belsky's insider knowledge that adds a wonderful layer to this story of media and murder.” —Michael Koryta, New York Times best-selling author

“Belsky (The Last Scoop) is rubbing elbows with Michael Connelly, Daniel Silva, Louise Penny, and C.J. Box, James Lee Burke, John Grisham, Ken Bruen, Robert Crais and Greg Iles. That is high praise for Belsky. If you’re a fan of murder mysteries, then start this book which you won’t put down until the story is over.” —Men Reading Books

R. G. Belsky is an author of crime fiction and a journalist in New York City. He has been a top editor at the New York Post, NY Daily News, Star Magazine, and NBC News. Yesterday’s News is the first in his award-winning Clare Carlson Mystery Series, followed by Below the Fold, The Last Scoop, and Beyond the Headlines. Belsky resides in New York City.
Loading...
or support indie stores by buying on