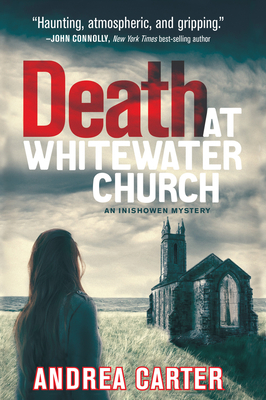 When a skeleton is discovered in the hidden crypt of a deconsecrated church, everyone is convinced the bones must be those of Conor Devitt, a local man who went missing on his wedding day six years previously. But the postmortem reveals otherwise.

Solicitor Benedicta “Ben” O’Keeffe is acting for the owners of the church. She is reluctant to get involved, but when Conor’s brother dies in strange circumstances shortly after coming to see her, she finds herself drawn into the mystery. Whose is the skeleton in the crypt and how did it get there? Is Conor Devitt still alive, and if so, is there a link? What happened on the morning of his wedding to make him disappear?

Negotiating between the official investigation—headed up by the handsome but surly Sergeant Tom Molloy—and obstructive locals with secrets of their own, Ben unravels layers of personal and political history to get to the truth of what happened six years before.

Death at Whitewater Church is the first in a series of Ben O’Keeffe mysteries set on the Inishowen Peninsula in County Donegal, Ireland.

While all of the novels in the Inishowen Mystery Series stand on their own and can be read in any order, the publication sequence is:

Praise For Death at Whitewater Church (An Inishowen Mystery #1)…

Praise for the Inishowen Mystery Series

“With Death at Whitewater Church, Andrea Carter announces herself as one of the most exciting new voices in Irish crime fiction. A wonderfully written debut, the rugged beauty of Donegal provides a stunningly realized backdrop to the twists and turns of Ben's investigations.” —Brian McGilloway, New York Times best-selling author

“A beguiling heroine—clever, sympathetic, and bearing a weight of guilt . . . this is Andrea Carter’s first book; she’ll go far.” —The Times (London)

“Andrea Carter writes brilliantly about a lively, entirely credible community where even your friends are suspects and your neighbors may end up dead. Everyone has a secret, and the revelations come thick and fast. Riveting, intriguing, and worryingly real.” —Liz Nugent, award-winning author

“Those seeking a contemporary puzzler in the Agatha Christie tradition will have fun.” —Publishers Weekly

Andrea Carter holds an MFA in Creative Writing from University College Dublin. Her first book, Death at Whitewater Church, was one of the winners of the Irish Writers Centre Novel Fair and she has been the recipient of two Arts Council of Ireland Literature Bursary Awards and a Dublin City Council Bursary. Following Treacherous Strand, The Well of Ice is the third in the Inishowen Mystery Series—about to be adapted for a television crime series to be titled Donegal—The Inishowen Mysteries. Andrea Carter lives in Dublin with her husband, documentary maker Geoff Power.
Loading...
or
Not Currently Available for Direct Purchase