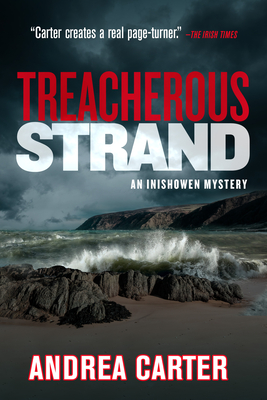 The majestic Inishowen Peninsula shore—home to dangerous and unpredictable currents

A woman’s body washes up on a remote beach on the Inishowen Peninsula. Partially clothed, with a strange tattoo on her thigh, she is identified as Marguerite Etienne, a French woman who has been living in the area. Solicitor Ben (Benedicta) O’Keeffe is consumed by guilt: for the second time in her life Ben has failed someone who needed her, with tragic consequences.

When local sergeant Tom Molloy dismisses Marguerite’s death as the suicide of a disturbed and lonely woman, Ben cannot let it lie. Ben uncovers Marguerite’s strange past as a member of a French doomsday cult, which she escaped twenty years previously, but not without leaving her baby daughter behind. Disturbed by what appears to be chilling local indifference to Marguerite’s death, Ben pieces together the last few weeks of the French woman’s life in Inishowen.

What she discovers causes her to question the fragile nature of her own position in the area, and she finds herself crossing boundaries—both personal and professional—to unearth local secrets long buried.

Treacherous Strand is the second in a series of mysteries set in the fictional town of Glendara on the Inishowen Peninsula in County Donegal with amateur sleuth, solicitor Ben O’Keeffe. These atmospheric and immersive mysteries are being adapted as a television series to be filmed in Inishowen.

Perfect for mystery readers who enjoy character driven mysteries, with a strong female protagonist and a powerful sense of place

While all of the novels in the Inishowen Mystery Series stand on their own and can be read in any order, the publication sequence is:

Praise for the Inishowen Mystery Series

“With Death at Whitewater Church, Andrea Carter announces herself as one of the most exciting new voices in Irish crime fiction. A wonderfully written debut, the rugged beauty of Donegal provides a stunningly realized backdrop to the twists and turns of Ben's investigations.” —Brian McGilloway, New York Times best-selling author

“Andrea Carter writes brilliantly about a lively, entirely credible community where even your friends are suspects and your neighbors may end up dead. Everyone has a secret, and the revelations come thick and fast. Riveting, intriguing, and worryingly real.” —Liz Nugent, award-winning author

“A beguiling heroine—clever, sympathetic, and bearing a weight of guilt . . . this is Andrea Carter’s first book; she’ll go far.” —The Times (London)

Andrea Carter grew up in the midlands of Ireland, studied law at Trinity College Dublin, and worked as a solicitor on the Inishowen Peninsula, County Donegal where she ran the most northerly solicitor’s practice in the country. Following that, she moved to Dublin to practice as a barrister before turning to write crime novels. She holds an MFA in Creative Writing from University College Dublin. Her first book Death at Whitewater Church was one of the winners of the Irish Writers Centre Novel Fair and she has been the recipient of two Arts Council of Ireland Literature Bursary Awards and a Dublin City Council Bursary. Treacherous Strand is the second in the Inishowen Mystery Series, followed by The Well of Ice. The series is about to be adapted for television. She lives in Dublin with her husband, documentary maker Geoff Power.
Loading...
or
Not Currently Available for Direct Purchase