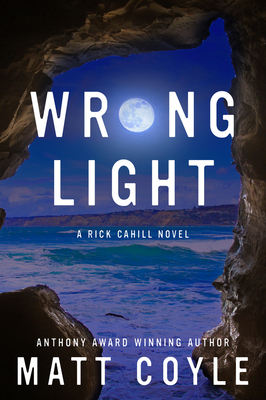 Naomi Hendrix’s sexy voice hovering over the radio waves isn’t the only thing haunting the Southern California nights. A demented soul is stalking Naomi, hiding in the shadows of the night, waiting for the right moment to snatch her and fulfill a twisted fantasy.

When Naomi’s radio station hires PI Rick Cahill to protect Naomi and track down the stalker, he discovers that Naomi is hiding secrets about her past that could help unmask the man. However, before Rick can extract the truth from Naomi, he is thrust into a missing person’s case—an abduction he may have unwittingly caused. The investigating detective questions Rick’s motives for getting involved and pressures him to stop meddling.

While Rick pursues Naomi’s stalker and battles the police, evil ricochets from his own past and embroils Rick in a race to find the truth about an old nemesis. Is settling the score worth losing everything?

“With Wrong Light Matt Coyle is on top of his game and Rick Cahill ascends to the top ranks of the classic private eyes. Coyle knows the secret: digging into a crime means digging into the past. Sometimes it’s messy, sometimes it’s dangerous—always it’s entertaining. You’ll find all of that and more in this great read.” —Michael Connelly, New York Times best-selling author

“Part pacy thriller and part fair-play puzzle, Wrong Light delivers, even if you read it as a page-turner alone. But delve a little deeper and there's so much more. Coyle honors the gum-shoe tradition but confounds expectations; he both celebrates and laments masculinity; and he writes with respect of the price his hero pays for the life he lives.” —Catriona McPherson, multi-award-winning author

“A complex character, Rick Cahill is a refreshingly original PI with a dark past who will not hesitate to take the law into his own hands, if need be. Wrong Light is compulsive storytelling, intelligently scripted, and filled with twists and turns you never see coming.” —New York Journal of Books

“For the Jim Thompson crowd, who want their noir straight, no chaser.”—Booklist

“Rick Cahill . . . has a conscience, similar to Robert Parker’s Spenser and is not averse to breaking rules to uncover the truth.” —Library Journal

Praise for the Rick Cahill series

“Sharp, suspenseful, and poignant, [Lost Tomorrows] hits like a breaking wave and pulls readers into its relentless undertow. Matt Coyle is at the top of his game.” —Meg Gardiner, Edgar Award-winning author​​​

Matt Coyle is the best-selling author of the Rick Cahill PI Crime Series. Wrong Light is the fifth in this award-winning series and a Lefty Award finalist. His novels have won the Anthony, the Lefty, and the San Diego Book Award, among others, and have been nominated for numerous Anthony, Macavity, Shamus, and Lefty Awards. Matt is a graduate of UC Santa Barbara and lives in San Diego with his yellow Lab, Angus.
Loading...
or
Not Currently Available for Direct Purchase