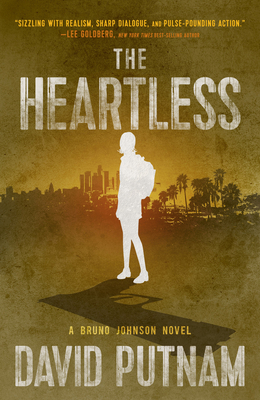 The Heartless (A Bruno Johnson Thriller #7)

Former LA County Deputy Bruno Johnson is now a bailiff in the courts having stepped down from his role on the Violent Crimes Team to spend more time with his daughter, Olivia. Bruno fears his job decision may have come too late when he gets a frantic call to extricate Olivia from a gunpoint situation in a LA gang-infested neighborhood. His desperation escalates when he realizes Louis Barkow, a stone-cold killer awaiting trial, had orchestrated that deadly tableau.

When Barkow and three other criminals break out of jail and hit the streets, Bruno is plunged back into violent crime mode. Now, the agenda is personal—Olivia has become a pawn in the desperate chase of this sinister murderer.

The walls are caving in on Bruno as violence escalates in his hunt for Barkow and his heart strings are stretched to the breaking point as he struggles to protect his daughter not only from the criminal violence swirling around them, but from Olivia’s own impetuous life choices.

“David Putnam knows the mean streets and the characters who inhabit them better than anyone writing crime fiction. In The Heartless, Putnam is at the top of his game. Fans of Bruno Johnson will rejoice at this latest offering.” —Alan Russell, New York Times best-selling author

“I really loved The Disposables. It’s raw, powerful, and eloquent. It's a gritty street poem recited by a voice unalterably committed to redemption and doing the right thing in a wrong world. I'll be first in line for the next one from David Putnam.” —Michael Connelly, New York Times best-selling author

"David Putnam provides an insider's knowledge of the Los Angeles Sheriff's Department. His characters and settings are rich and authentic, and his dialogue is spot on accurate.” —Robert Dugoni, New York Times best-selling author

During his career in law enforcement, best-selling author David Putnam has done it all: worked in narcotics, violent crimes, criminal intelligence, hostage rescue, SWAT, and internal affairs, to name just a few. He is the recipient of many awards and commendations for heroism. The Heartless is the seventh novel and the third in the “young Bruno” prequels for the acclaimed and best-selling Bruno Johnson crime series, following The Disposables, The Replacements, The Squandered, The Vanquished, The Innocents, and The Reckless. Putnam lives in the Los Angeles area with his wife, Mary.
Loading...
or
Not Currently Available for Direct Purchase