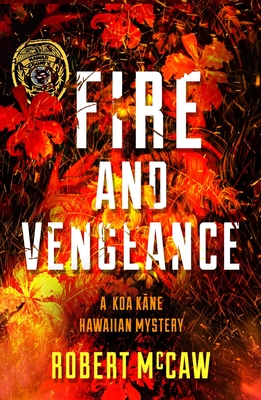 Having killed his father’s nemesis and gotten away with it, Hilo, Hawaiʻi Chief Detective Koa Kāne, is not your ordinary cop. Estranged from his younger brother, who has been convicted of multiple crimes, he is not from a typical law enforcement family. Yet, Koa’s secret demons fuel his unwavering drive to pursue justice.

“McCaw has again cooked up a tasty stew with ingredients from a mix of staples from the crime fiction pantry . . . Makes for fine reading.” —Booklist

"Fire and Vengeance is a meticulous mystery. In [this] winding thriller, a conflicted cop wrangles a conspiracy and a family emergency." —Foreword Reviews

"Off the Grid is flush with action and vivid descriptions. This unputdownable book is sure to make a mark in the literary world." —New York Journal of Books

“Readers who crave watching a smart cop work in a crackerjack police procedural will find a beauty here. Want a good espionage adventure? It's here, too, with intrigue, betrayal, assassination.” —Booklist (*starred review)

“Readers who love a complex hard-boiled detective with flaws and secrets, and depictions of Hawaiʻi’s culture and beauty, will be drawn to Koa Kāne and the mosaic richness of an American paradise.” —BookTrib

"[Fire and Vengeance] is a well-written, complicated crime story with a marvelous sense of place." —Midwest Book Review

Robert McCaw grew up in a military family, traveling the world. He is a graduate of Georgetown University, served as a U.S. Army lieutenant, and earned a law degree from the University of Virginia. He was a partner in a major international law firm in Washington, D.C. and New York City, representing major Wall Street clients in complex civil and criminal cases. Having lived on the Big Island of Hawaiʻi, McCaw imbues his writing of the Islands with his more than 20-year love affair with this Pacific paradise. Fire and Vengeance follows Off the Grid and Death of a Messenger in his Koa Kāne Hawaiian Mystery series. Bob now lives in New York City with his wife, Calli.