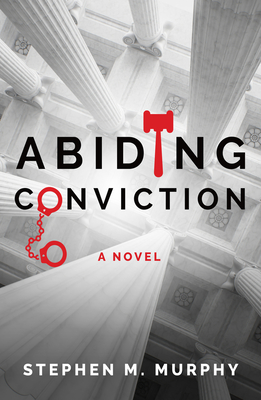 Dutch Francis is a defense attorney in the case of a judge accused of killing his wife. Just as the trial is about to begin, Ginnie Turner, Dutch’s wife and TV news broadcaster, goes missing.

Under extreme duress, Dutch tries to extricate himself as the judge’s attorney—or at least postpone the trial. The judge insists that the trial proceed without delay and that Dutch remain his attorney.

Exhausted by the murder trial, Dutch confronts an ineffectual police department, suspicious that he is involved in his wife’s disappearance. He takes matters into his own hands as he struggles to balance both responsibilities—the trial and finding his wife—pushing him to the brink of losing everything he holds dear.

At first Dutch suspects that Ginnie was kidnapped in retaliation for her recent stories about sex scandals. But after receiving bits of her in the mail—fingernails, hair—he realizes the kidnapper’s intent may be to punish him.

Could his defense of the judge be the reason?

“In Abiding Conviction, Stephen M. Murphy has crafted a winning legal thriller that will delight fans of his Dutch Francis series and garner him many more—impeccable plotting, true to life characters, unexpected twists and surprises put the ‘drama’ into courtroom drama and make this one impossible to put down.” —John Lescroart, New York Times best-selling author

“Smart, tenacious, and resourceful, Dutch is a fighter with a moral compass and a compassionate soul. With a complex and fast-paced plot, Abiding Conviction is a compelling read where you can feel Dutch’s desperation as the storylines converge into a satisfying conclusion. Already looking forward to the next installment. Highly recommended.” —Sheldon Siegel, New York Times best-selling author

“A detailed picture of how the American legal system works contrasts nicely with the mounting suspense of Dutch’s desperate search for his wife. Legal-thriller fans should add Murphy to their lists of authors to watch.” —Booklist

“Abiding Conviction is a riveting courtroom drama with authentic and dazzling dialogue that could only have been written by a total pro at the top of his game. Stephen Murphy has done it again. Don’t miss it!” —John Martel, national best-selling author of The Alternate

“I like Dutch Francis, the hero of Abiding Conviction. You will too. He’s good company. And you’ll like the story he tells you about a complex, interesting case, with many quirky, but often sympathetic characters. This is a very good book.” —John J. Osborn, Jr., author of The Paper Chase

“[In Abiding Conviction,] the tension holds the reader, and I can attest the courtroom scenes are genuine. Great suspenseful work by novelist Stephen M. Murphy.” —Jay Brandon, author of From the Grave

Former trial lawyer Stephen M. Murphy is the author of the Dutch Francis thriller series. A Boston native, he is a graduate of the College of the Holy Cross in Worcester, Massachusetts, and the University of San Francisco School of Law. He served as a law clerk to the justices of the New Hampshire Superior Court, and while in New Hampshire, he worked on a murder trial that inspired his first Dutch Francis novel, Alibi, which was followed by About Power, and now, Abiding Conviction. He currently lives in the San Francisco area.
Loading...
or support indie stores by buying on