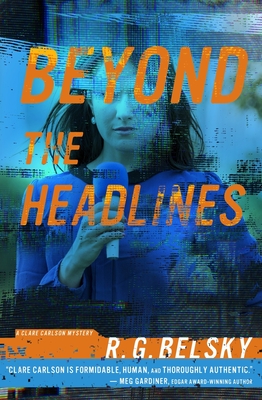 
Praise For Beyond the Headlines (Clare Carlson Mystery #4)…

“[Beyond the Headlines] has an excellent plot featuring fantastic characters that will hold your attention all the way through.” —Manhattan Book Review

“Belsky’s not just funny; he has a pitch-perfect ear for dialogue, including writing snappy New York repartee not seen since Susan Isaacson.” —BookTrib

“A complex and deftly written mystery replete with unexpected plot twists and darkly memorable characters, Beyond The Headlines by novelist R. G. Belsky is a mystery lovers delight from cover to cover.” —Midwest Book Review

R. G. Belsky is an author of crime fiction and a journalist in New York City. He has been a top editor at the New York Post, NY Daily News, Star Magazine, and NBC News. Beyond the Headlines is the fourth novel in his award-winning Clare Carlson Mystery Series, following Yesterday’s News, Below the Fold, and The Last Scoop. Belsky resides in New York City.
Loading...
or support indie stores by buying on