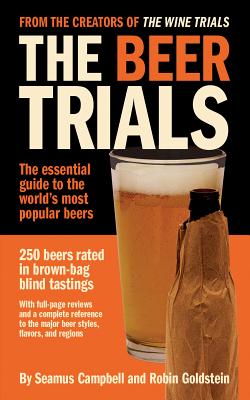 • The essential reference for anyone who enjoys drinking beer

• Blind tastings by a rigorous panel of beer experts and brewers led by Seamus Campbell, one of the world's 96 Certified Cicerones

• Rates the world's most popular beers, from craft brews to macro-lagers, from Tsingtao to Spaten, Deschutes to Tecate, Maudite to Sam Adams, Bud Light to Chimay

• From the creators of The Wine Trials, the world's bestselling guide to inexpensive wines, comes the first beer guide ever to be based on blind tastings.

Seamus Campbell is one of just 96 beer experts to have passed the rigorous Certified Cicerone exam. An experienced homebrewer, Seamus happens to share a birthday with legendary Beer Hunter Michael Jackson. He lives in Portland, Oregon, where he writes the beer blog The Daily Wort and is a contributor to the Fearless Critic Portland Restaurant Guide.

Robin Goldstein is author of The Wine Trials and co-author of The Wine Trials 2010 and The Beer Trials. He is a contributor to the New York Times' Freakonomics blog, and has written for more than 30 Fodor's travel guides, from Italy to Argentina to Hong Kong. He has an A.B. in neuroscience and philosophy from Harvard University, a J.D. from the Yale Law School, a certificate in cooking from the French Culinary Institute in New York City, and a WSET advanced wine and spirits certificate.
Loading...
or
Not Currently Available for Direct Purchase