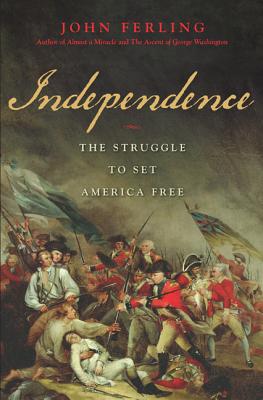 The Struggle to Set America Free

No event in American history was more pivotal-or more furiously contested-than Congress's decision to declare independence in July 1776. Even months after American blood had been shed at Lexington and Concord, many colonists remained loyal to Britain. John Adams, a leader of the revolutionary effort, said bringing the fractious colonies together was like getting "thirteen clocks to strike at once."

Other books have been written about the Declaration, but no author has traced the political journey from protest to Revolution with the narrative scope and flair of John Ferling. Independence takes readers from the cobblestones of Philadelphia into the halls of Parliament, where many sympathized with the Americans and furious debate erupted over how to deal with the rebellion. Independence is not only the story of how freedom was won, but how an empire was lost.

At this remarkable moment in history, high-stakes politics was intertwined with a profound debate about democracy, governance, and justice. John Ferling, drawing on a lifetime of scholarship, brings this passionate struggle to life as no other historian could. Independence will be hailed as the finest work yet from the author Michael Beschloss calls "a national resource."

John Ferling is Professor Emeritus of History at the State University of West Georgia. A leading authority on American Revolutionary history, he has appeared in many documentaries and has written numerous books, including Almost a Miracle: The American Victory in the War for Independence, Adams vs. Jefferson: The Tumultuous Election of 1800, The First of Men: A Life of George Washington, Setting the World Ablaze: Washington, Adams, and Jefferson in the American Revolution, and the award-winning A Leap in the Dark: The Struggle to Create the American Republic.

Praise For Independence: The Struggle to Set America Free…

“Mesmerizing. Masterful. History written with the gravitational pull of a good novel. A history book that deserves to become a big best seller.” —Dan Rather

“This is how it really happened. In unequivocal prose, John Ferling captures the combined bluster and outrage on both sides of the Atlantic. He exposes the quirks, while exploring the vision, of the opinionated, opportunistic delegates who were present in Philadelphia in 1776; he shows us just how they rhetorically overcame the "mystique of invincibility" that attached to the British military, before launching America, in the words of one delegate, "on a most Tempestuous Sea." Independence is rich in personality, and Ferling unsurpassed as an authority. This is no ordinary history.” —Andrew Burstein, author of Jefferson's Secrets, and coauthor of Madison and Jefferson

“John Ferling has established himself as one of the leading chroniclers of the American Revolution, but Independence goes beyond anything he has written before. Instead of recycling the familiar story of the Revolution, he has given us an enlightening and exciting book that proves that history has no guarantees or foreordained outcomes. Expertly blending biographical vignettes with fast-paced narrative and sure-footed interpretation, Ferling captures the mystery of historical contingency in exploring the period between the Boston Tea Party in 1773 and the declaration of American independence in 1776. Not even the founding fathers knew what the future would bring; Ferling performs a national public service in reminding us of this basic fact, and demonstrating it with elegance and style.” —R. B. Bernstein, distinguished adjunct professor of law, New York Law School, and author of The Founding Fathers Reconsidered and Thomas Jefferson

“In clear and elegant prose and with formidable scholarship, John Ferling freshly examines the period that led to declaring independence. By focusing on the character of leaders in both England and her colonies as they intersected with circumstances, he captures the uncertainty of the times and the unpredictable journey to the declaration itself.” —Edith B. Gelles, author of Abigail and John: Portrait of a Marriage

“A venerable historian of the American Revolution focuses on the events between the shot heard round the world and the signing of the Declaration of Independence … A lucid, erudite account of a period both terrifying and supremely inspiring.” —Kirkus

“Noted for his knowledge of the Revolutionary era, Ferling … again gives us a narrative hard to surpass in fluency and authority.” —Publishers Weekly

“In this splendid book, noted founding-era historian Ferling presents a convincing narrative of American independence that focuses on the role of contingency in the colonial break with the mother country … Ferling's entertaining and edifying work is sure to find an audience among general readers.” —Booklist