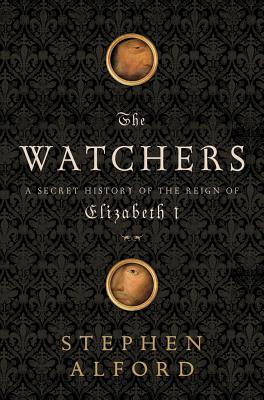 A Secret History of the Reign of Elizabeth I

In a Europe aflame with wars of religion and dynastic conflicts, Elizabeth I came to the throne of a realm encircled by menace. To the great Catholic powers of France and Spain, England was a heretic pariah state, a canker to be cut away for the health of the greater body of Christendom. Elizabeth's government, defending God's true Church of England and its leader, the queen, could stop at nothing to defend itself.

Headed by the brilliant, enigmatic, and widely feared Sir Francis Walsingham, the Elizabethan state deployed every dark art: spies, double agents, cryptography, and torture. Delving deeply into sixteenth-century archives, Stephen Alford offers a groundbreaking, chillingly vivid depiction of Elizabethan espionage, literally recovering it from the shadows. In his company we follow Her Majesty's agents through the streets of London and Rome, and into the dank cells of the Tower. We see the world as they saw it-ever unsure who could be trusted or when the fatal knock on their own door might come. The Watchers is a riveting exploration of loyalty, faith, betrayal, and deception with the highest possible stakes, in a world poised between the Middle Ages and modernity.


Praise For The Watchers: A Secret History of the Reign of Elizabeth I…

“The secret agents who labored to prove Mary's guilt and bring about her execution are the stars of this meticulous chronicle ... Elizabeth's spies routinely used the rack for interrogations; torture was then, as now, justified as a means of protecting 'the security of the state.” —New Yorker

“If you're looking for something that combines Elizabethan intrigue, history and espionage, try Stephen Alford's The Watchers…. a coherent and well-written narrative that is entertaining and readable. He keeps track of a vast number of characters, carefully explains the deadly plots and doesn't get bogged down in boring minutia.” —Tish Wells, McClatchy Newspapers

“Alford populates this engaging study of Elizabethan espionage with a cast of colorful characters and exposes the dark underbelly of a period that is often better known for Shakespeare and the triumph against the Spanish Armada. Secret correspondence, infiltration into the ranks of exile English Catholics in Rome and the betrayal of double agents are some of the thrilling elements that comprise this little-known tale.” —Ilana Teitelbaum, Shelf Awareness

“It provides a genuine--and compelling--reappraisal of one of the most studied periods in English history: the reign of Elizabeth I. In exploring the world (or underworld) of Elizabethan espionage, Alford takes us on a darker, more disturbing and arguably more fascinating journey through the Elizabethan era than any other historian of the period …[An] engaging and perfectly pitched narrative. … Alford weaves together the bewilderingly complex threads of plots and counterplots so skillfully that as a reader you are never left floundering.” —BBC History Magazine (named a Pick of the Month)

“Stephen Alford's fascinating book … offers detailed examinations of the conspiracies of the age, from the genuinely dangerous to the distantly ridiculous. They culminate in the period's best-known intelligence coup, the entrapment and execution of Mary Queen of Scots after the so-called Babington Plot, and Alford's account of this episode plays out as a piece of bleak cat-and-mouse reminiscent of le Carré at his most disenchanted.” —Daily Telegraph (UK)

“Stephen Alford's gripping new book…brings these men, their worlds and the unfortunate victims of their espionage vividly out of the shadows. Their interlocking biographies and adventures combine to produce a portrait of a mid-to-late Elizabethan England that was ruled by Walsingham's maxim ‘There is less danger in fearing too much than too little.'…Alford has brought a dash of le Carré to the 16th century.” —The Times (UK)

“Deep and convincing new study of the Elizabethan security services … Alford's mastery of the Elizabethan state papers delivers a detailed, believable, and often compelling account of the strategies deployed by the state to identify and neutralise those whom it deemed guilty of disloyalty.” —Literary Review (UK)

“Fascinating… Alford concludes that the government ‘was absolutely right to believe the truths of plots and conspiracies and plans for invasion and assassinations'. However, they ‘overestimated their enemies' intelligence, cunning and organisation'. What gave the struggle its venom was the context, the religious wars that ravaged 16th century Europe. If you want to know the inside story of that struggle, the dark heart of calculation and the fight for survival, then this is the book to read. I know no better.” —The Spectator (UK)

“Alford has written an exhilarating and well-researched history. He has also produced a thought-provoking volume that may lead the read to ponder the dangerous interplay of national defense and repression….[a] refreshing take on the subject.” —Tessa Minchew, Library Journal

“Beginning with a powerful piece of counterfactual history – the assassination of Elizabeth I in 1586--Stephen Alford describes the fears and suspicions that seared Elizabethan society. We see in vivid detail the whole succession of real and imagined Catholic plots against the queen. The result is an essential story, of how the leaders of the government increasingly became preoccupied with the need for espionage, to the point of obsession. And as Dr Alford observes: ‘the more obsessively a state watches, the greater the dangers it perceives.' Anyone who thinks of Elizabeth's reign as a golden age untainted by shades of terror should read this book: a consummate blend of scholarship, storytelling that reveals the sinister under-edge of power.” —Ian Mortimer, author of Medieval Intrigue: Decoding Royal Conspiracies and The Time Traveler's Guide to Elizabethan England

“An intimate and revealing exploration of the men who did the Elizabethan security state's dirty work. Lifting the lid on the Protestant-Catholic 'cold war' of the late sixteenth century, Stephen Alford sifts the sources with a forensic eye, bringing to life the motley collection of self-interested chancers and drifters, religious and political zealots who watched each other in the streets of London, Paris and Rome. Leading us into the dark corners, safe houses and interrogation chambers of this twilight world, The Watchers paints a fascinating picture of the vast and nebulous threat facing Elizabethan England - and its determination to deal with that threat by any means necessary.” —Thomas Penn, author of Winter King: Henry VII and the Dawn of Tudor England

“The image of Elizabethan England is one of ruffs and lutes, of gentlemanly courtiers spreading velvet cloaks over filthy puddles for the Virgin Queen. However Gloriana's England was nothing less than a police state run by hawk-eyed spymasters and their treacherous employees, utterly dedicated to defending the realm from its enemies using methods of blackmail, bribery, betrayal, entrapment and violence familiar to the KGB and Gestapo.” —Daily Express

“Absorbing and closely documented…Stephen Alford's engrossing book reminds us that most governments will stop at very little if national security is at stake. When political conflicts are exacerbated by fanatically held religious differences, the outcome is even more deadly.” —Guardian

“An enthralling account of the murky shadow-world of Elizabethan espionage over which Walsingham presided…[Alford] has delved deep into encrypted archives to discover the lengths to which Elizabethan Englishmen were prepared to go to destroy their queen, or to defend her--and and one of the surprises of a story full of dizzying twists is quite how many of them ended up attempting to do both.” —Times Higher Education Supplement

“Alford…has delved deeply into 16th-century archives to unearth a history of the dark underside to the Elizabethan golden age-a page-turning tale of assassination plots, torture, and espionage.” —Publishers Weekly (starred)

“Alford is an expert on all things Elizabethan, and his intimate knowledge of the queen's ministers and the period's political history guarantees the accuracy and thoroughness of this rip-roaring story…. Tracing the devious machinations of rebels and intelligence agents alike, Alford makes brilliant use of the intercepted letters, illegal publications and incendiary pamphlets found in the Elizabethan archives. A great spy novel--except that it's all true.” —Kirkus Reviews

“The biographer of the Virgin Queen's de facto prime minister (Burghley, 2008) enters the vortex of Elizabethan espionage, which readers of the era will find irresistible…. Alford perceptively portrays the intelligence system of a queen perpetually popular with history buffs.” —Gilbert Taylor, Booklist

Stephen Alford is a fellow in history at King's College, Cambridge, and the author of the acclaimed Burghley: William Cecil at the Court of Elizabeth I, The Early Elizabethan Polity: William Cecil and the British Succession Crisis, 1558-1569, and Kingship and Politics in the Reign of Edward VI. He writes for the Times Literary Supplement and other periodicals.
Loading...
or
Not Currently Available for Direct Purchase