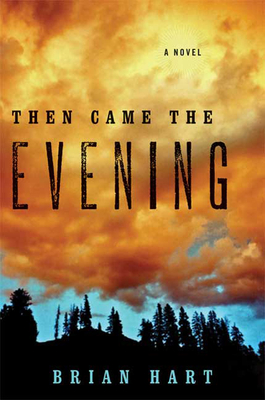 Then Came the Evening (Hardcover)

“Brian Hart's dark, brooding debut novel portrays an American West that few writers capture, and certainly not as well as he does. Tense dialogue captures the lives entwined in this bleak, raw landscape. Then Came the Evening is a psychological stunner.”
— Andy Nettell, Back of Beyond Books, Moab, UT
View the List

A riveting, psychologically rich family drama set in the American West, from a writer who has been compared to Cormac McCarthy.
Bandy Dorner, home from Vietnam, awakes with his car mired in a canal, his cabin reduced to ashes, and his pregnant wife preparing to leave town with her lover. Within moments, a cop lies bleeding on the road.

Eighteen years later, Bandy is released from prison. His parents are gone, but on the derelict family ranch, Bandy faces a different reunion. Tracy, his now teenaged son, has come to claim the father he's never known. Iona, Bandy's ex-wife, has returned on the heels of her son. All three are damaged, hardened, haunted. But warily, desperately, they move in a slow dance around each other, trying to piece back together a family that never was; trying to discover if they belong together at all.

With unflinching honesty and restrained beauty, Brian Hart explores the possibilities and limitations of his characters as they struggle toward a shared future. Like a traditional Greek tragedy, suffused with the mud, ice, and rock of the raw I daho landscape, "Then Came the Evening "is tautly plotted and emotionally complex a stunning debut.

Praise For Then Came the Evening…

“Hart’s style is stripped-down and powerful…Every detail Hart paints, from the culture and rough-hewn land right down to the animals that live in it, underscores the “between a rock and a hard place” dilemma of this fragile family. The beautifully intimate descriptions of the Idaho setting are a driving force.”   —High Country News

“Idaho may have been discovered, but thanks to Hart, it’s no longer unstoried.”   —Chronicles

“Tragic and gorgeous… gritty and poignant…In Hart, there is an echo of Cormac McCarthy's resolute yet restrained capacity for tragedy and violence. Yet there's something here that is all Hart, something we should all look forward to seeing again.”  —Missoula Independent

“The story resonates with power and potential.  Idaho can be a stark state, battered by the elements that mark northern climes. In “Then Came The Evening,” Brian Hart turns this circumstance of geography into a fresh tale of family breakdown and self-examination.”  —Petoskey News

“All the elements are in place for an inspirational, heartland-America redemption story, but Hart taps into his characters’ fears with gritty lyricism and noirish repartee that subvert any feel-good temptations.”—New York Times Book Review

"Then Came the Evening is one of those novels whose story quietly takes hold of the reader on Page One and never lets go. Using both the stark and dangerous life of prison and Idaho's demanding yet beautiful landscape as backdrop, the author builds a first-rate if complex story around regrets, love and hope.”—Denver Post

“The landscape… is the book’s best-drawn character: vibrant, described credibly and without melodrama.  Hart deftly handles two perilously popular archetypes: ashes-to-ashes and like-father-like-son. These themes build gently to an ending that is well-structured and landscape-centered, bringing full-circle the leitmotif of fire and snow.”   —Brooklyn Rail

“Compelling, beginning to end. The thoughtful, spare prose punctuated with quiet yet effective sensory detail -- "The cold and the silence were woven together and stretched so tightly that there were creaking sounds in the air, nautical sounds of binding rope" -- creates a moving poignancy.  Hart, who's been compared to Cormac McCarthy, has a keen sense of that small, dark margin between the rock and the hard place, and that's where he puts his characters to sort out their lives.”—Oregonian

“Like the characters in this quietly exceptional début novel, the author is an Idaho native, and an astute observer of the transitional Western landscape.”—New Yorker

“It’s the (broken) family dynamics that eat up the last half of the book (and, presumably, Bandy and Iona’s life) that Hart does the most justice, somehow both sensitively and unrepentantly laying them bare.”—Time Out Chicago

“Hart constructs a taut drama around the attempt of these three wounded characters to build something out of the wreckage of their lives.  Hart could hardly have chosen a more unsympathetic trio, characters perpetually down on their luck in part because of misfortunes that they can’t control, but mostly because of ill-considered choices that they make.  And yet Hart earns the reader’s attention to them, if not always sympathy for them, in large part through the beauty and simplicity of his rhythmic prose, his natural dialogue, and his elegant evocations of the landscape and portrayals of how the characters’ shifting identities fit into the evolving town. It takes a rare writer to be able to convince a reader to follow a group of bad-news characters to such bleak places, but Brian Hart’s prose makes the story enjoyable, even when the events it describes are not.  In Then Came The Evening, Hart has achieved a consistency of tone, a concision of description, and an intensity of focus that make for a satisfying drama.”—New West

“Say one thing for first-time novelist Brian Hart: He sets himself a challenge right out of the box.  The challenge is Vietnam veteran Bandy Dorner, one tormented character in a novel filled with damaged souls trying to live with loss, guilt and bone-deep sorrow. We know that Bandy is doomed from the moment he sets foot on the page, and we know that whatever he suffered in the war, nothing justifies the murderous rage that slaps him in prison as the novel opens.  But Hart, fulfilling the promise he showed in 2005 when he won the Keene Prize, the largest student-writing prize in the world, still manages to make us care about Bandy and the others. We hope against hope that they can redeem something from their shattered lives…Hart deftly probes the dynamics of family, asking whether blood ties can overcome disastrous choices, but the novelist resists any easy spiritual rebirth for his characters.”—Dallas Morning News

“This novel's finely detailed episodes of physical and emotional violence bring to mind the works of Larry Brown, while its lyrical descriptions speak of landscape and rural community life like the books of Robert Morgan. Hart explores, with brutal honesty and a delicate respect for the strength of the individual spirit, the human needs for love, for continuity after death, and for redemption. His depiction of the effects of poverty, violence, and drugs on the human spirit is acute and poignant.”—Booklist

“Hart’s evocative debut traces the long descent of a tragic Western figure straight out of a Sam Shepard play. Desiccated descriptions of a long-fallow landscape and the author’s ability to conjure up the ghosts of a low man’s past further enrich this heartbreaking, convincing drama.”—Kirkus Reviews

“Most impressive is Hart’s ability to conjure rich and conflicted characters in an uncommon situation; his handling of the material is sublime.”—Publishers Weekly (starred)

“The unforgiving rural landscape of Idaho is the perfect backdrop for first-time novelist Hart's poignant story of three misfits. Hart refuses to tie up everything neatly, and that's what makes this novel so appealing. Highly recommended to readers of good literary fiction.”—Library Journal

“Brian Hart’s Then Came the Evening shows us the hidden America, a world of remote holdings, long memories, fierce yearnings and violent strivings. He dramatizes this world with an immense care and tenderness. There is a deep feeling in the book for the gnarled landscape itself, its stark beauty, but even greater emotion surrounds the characters that inhabit it. Their efforts to live together and love each other are depicted with a grace and understanding which is rare and memorable.”—Colm Tóibín

“Brian Hart has written a remarkable first novel—violent and tender, harsh yet beautiful. Sentence for sentence, no other young writer I know can match him. If Cormac McCarthy had been a carpenter in rural Idaho for nine years, this is the book he would have written. Then Came the Evening will break your heart.”—James Magnuson, Director of the Michener Center for Writers and author of Windfall and The Hounds of Winter

“Then Came the Evening is an important book, a novel of raging velocity and blazing empathy, a mature achievement. Brian Hart knows everything about his rural western setting, everything about his short-on-luck characters, and everything about making a reader turn the pages. This is a first novel written with a master's skill.”—Stephen Harrigan, author of The Gates of the Alamo and Challenger Park

"Brian Hart’s considerable genius is that he sees what the rest of us are unwilling to see and says what we are unable to say. Then Came the Evening is both harrowing and haunting, hypnotic and exhilarating. Hart can flat-out tell a story. He’s savvy, insightful, and fearless … What talent, what nerve, what an achingly beautiful and astonishing first novel."—John Dufresne, author of Requiem, Mass: A Novel

“Brian Hart’s Then Came the Evening is composed of equal parts science—a scrupulous exactitude for place and the emotions it evokes—and art—the astonishing deftness of its telling. Palpable always, and ultimately poignant, is its reverence for the physical world and its acknowledgment of the violence we do to it, to each other and to ourselves, and its wise and unflinching rendering of that mysterious gulf between who we are and who we wish to be. Here is a novel that will stick with you like a song, and needle you awake in the middle of the night.”—Michael Parker, author of If You Want Me to Stay

“Then Came the Evening is an edgy and affecting debut from a writer already bursting with promise and achievement. Brian Hart’s narrative voice is as tender as it is unflinching—and his novel of love squandered and oh-so-nearly retrieved is a triumph.”—Jim Crace, author of Quarantine, Being Dead, and many more novels