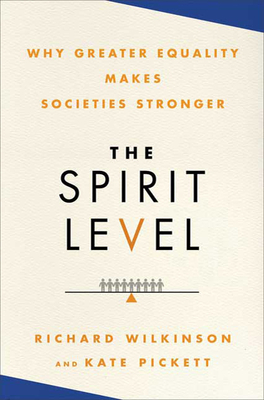 The eye-opening and headline-generating UK bestseller that shows how one single factor--the gap between its richest and poorest members--can determine the health and well-being of a society.

This is a book with a big idea, big enough to change political thinking...In half a page The Spirit Level] tells you more about the pain of inequality than any play or novel could.--Sunday Times (UK ) It is well established that in rich societies the poor have shorter lives and suffer more from almost every social problem. Now a groundbreaking book, based on thirty years' research, takes an important step past this idea. The Spirit Level shows that there is one common factor that links the healthiest and happiest societies: the degree of equality among their members. Not wealth; not resources; not culture, climate, diet, or system of government. Furthermore, more-unequal societies are bad for almost everyone within them--the well-off as well as the poor. The remarkable data assembled in The Spirit Level reveals striking differences, not only among the nations of the first world but even within America's fifty states. Almost every modern social problem--ill-health, violence, lack of community life, teen pregnancy, mental illness--is more likely to occur in a less-equal society. This is why America, by most measures the richest country on earth, has per capita shorter average lifespan, more cases of mental illness, more obesity, and more of its citizens in prison than any other developed nation. Wilkinson and Pickett lay bare the contradiction between material success and social failure in today's world, but they do not simply provide a diagnosis of our woes. They offer readers a way toward a new political outlook, shifting from self-interested consumerism to a friendlier, more sustainable society. The Spirit Level is pioneering in its research, powerful in its revelations, and inspiring in its conclusion: Armed with this new understanding of why communities prosper, we have the tools to revitalize our politics and help all our fellow citizens, from the bottom of the ladder to the top.

"A important book ... [Wilkinson and Pickett] argue that gross inequality tears at the human psyche, creating anxiety, distrust and an array of mental and physical ailments — and they cite mountains of data to support their argument."—Nicholas Kristof, New York Times

“Wilkinson and Pickett make an eloquent case that the income gap between a nation's richest and poorest is the most powerful indicator of a functioning and healthy society…Felicitous prose and fascinating findings make this essential reading.”

“In this fascinating sociological study, the authors do an excellent job of presenting the research, analyzing nuances, and offering policy suggestions for creating more equal and sustainable societies. For all readers, specialized or not, with an interest in understanding the dynamics today between economic and social conditions.”—Library Journal

“The Spirit Level will change the way you think about life, liberty and the pursuit of happiness, especially if you live in the United States. You will reexamine what it means to be successful, how you will seek and achieve personal satisfaction, and what you owe your fellow citizen.”—Jo Perry, BookBrowse.com

“It has taken two experts from the field of public health to deliver a major study of the effects of inequality on society. Though Richard Wilkinson and Kate Pickett are British, their research explores the United States in depth, and their work is an important contribution to the debate our country needs.”—Robert B. Reich, from the foreword

“Might be the most important book of the year.”—Guardian

“Fascinating and deeply provoking…The Spirit Level does contain a powerful political message. It is impossible to read it and not to be impressed by how often greater equality appears to be the answer, whatever happens to be the question. It provides a connection between what otherwise look like disparate social problems.”—David Runciman, London Review of Books

“This is a book with a big idea, big enough to change political thinking … In half a page [The Spirit Level] tells you more about the pain of inequality than any play or novel could.”—John Carey, Sunday Times

“Epidemiologists Richard Wilkinson and Kate Pickett don’t soft-soap their message. It is brave to write a book arguing that economies should stop growing when millions of jobs are being lost … we know there is something going wrong, and this book goes a long way towards explaining why … anyone who believes that society is the result of what we do, rather than who we are, should read The Spirit Level because of its unarguable battery of evidence, and because its conclusion is simple: we do better when we’re equal.”—Lynsey Hanley, Guardian

“A crucial contribution to the ideological argument. [The Spirit Level] demonstrates the scientific truth of the assertion that social democrats have made for a hundred years – sometimes more out of hope than intellectual certainty … Equality is not just a policy for the poor; it benefits us all and, therefore, should appeal to us all … The importance of The Spirit Level is that it provides a vital part of the intellectual manifesto on which the battle for a better society can be fought.”—Roy Hattersley, New Statesman

“The connection [between income inequality and dysfunctional societies] is spelt out with stark clarity in Wilkinson and Pickett’s remarkable new book. Income inequality, they show beyond any doubt, is not just bad for those at the bottom but for everyone.” —Will Hutton, Observer

“Richard Wilkinson and Kate Pickett put forward compelling evidence that income inequalities are at the root of a wide range of health and social problems in society.”—Niall Crowley, Irish Times Weekend Review

“Wilkinson and Pickett make a powerful argument as they pile on the charts linking inequality and society’s problems.”—Brian Clegg, BBC Focus

“[That Inequality causes social ills] is a sweeping claim, yet the evidence, here painstakingly marshaled, is hard to dispute.”—Economist

“Many readers will be inspired as I am by a new book, The Spirit Level … Wilson and Pickett compare not only different countries, but also the 50 US states. They show that greater equality benefits not just the poor, but all occupational groups. [The Spirit Level has] lots of graphs but no jargon.”—Peter Wilby, New Statesman

“[Wilkinson and Pickett] argue that, among the rich countries of the world, states with less inequality in incomes perform better on a wide range of indicators … The argument is a powerful counter to any simple equation of social progress and the advance of GDP.”—John Kay, Financial Times

“Compelling and shocking.  All free marketers should be made to memorize it from cover to cover.”—Yasmin Alibhai-Brown, Independent

Richard Wilkinson has played a formative role in international research on inequality, and his work has been published in ten languages. He is professor emeritus at the University of Nottingham Medical School. Kate Pickett is a senior lecturer at the University of York and a National Institute for Health Research Career Scientist. They live in North Yorkshire, England.
Loading...
or
Not Currently Available for Direct Purchase