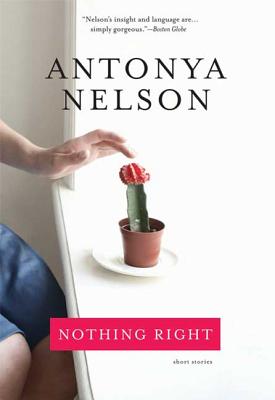 A contemporary master of the short story, Antonya Nelson writes with uncommon grace and unflinching insight about the remarkable realities of everyday existence. The eleven stories in Nothing Right-a selection of Nelson's greatest recent achievements, along with her latest, previously unpublished work-are largely set in her native Kansas, and resonate with deep familiarity. Nelson elegantly renders all the complexity, ambiguity, and beauty of daily life: the comforting rituals and unexpected disruptions, the maintenance of family ties and the poignant struggles of romance.

Honest, witty, and quietly revelatory, Nothing Right is a collection to be savored, showcasing a writer at the top of her form.


Praise For Nothing Right: Short Stories…

“In this powerful collection of 11 short stories, Nelson’s brilliantly constructed characters negotiate love, family, home and truth. Nelson consistently pays exquisite attention to detail, resulting in rich, vivid characters and settings…Nelson writes with wonderful grace and skill, each word carefully chosen, each passage carefully constructed.
This beautiful collection is another remarkable accomplishment for a writer often hailed as one of our most talented storytellers.” —Publishers Weekly (starred review)

“This beautiful collection is another remarkable accomplishment for a writer often hailed as one of our most talented storytellers.” —Publishers Weekly (starred review)

“Those wondering whether the spirit of bohemian anarchy endures in today's hunkered-down Red America need look only as far as the marvelously reliable Wichita, Kansas, native Antonya Nelson's latest story collection, Nothing Right…Nelson delivers convincing portraits--11 of them here--of folk who are alarmingly drinking-positive, more than a little familiar with illicit drugs, and all too conversant in the language of infidelity…Sordid, cynical, and supremely romantic tales.” —Elle Magazine

“Stellar… never has anxiety been made as entertaining as it is here. Nelson deploys a quirky, far-reaching humor and resonant detail to describe both the quiet and not-so-quiet implosions of midwestern families as they attempt to cope with contemporary life…. Nelson is in complete command of her material here, infusing her stories with just the right shades of poignancy, humor, and heartbreak.” —Booklist (starred review)

“Delightfully messy…Nelson gives readers plenty to ponder as her frequently baffled characters struggle to make sense of the circumstances in which they find themselves…Readers who relish conflict will burn through the pages as the disasters pile up, while those who appreciate well-rounded characters will be impressed with the variety of responses to said disasters, which reveal just how strong, flexible, and adaptable human beings can be under pressure. This weary hymn to coping with life's cruelties is a tour de force.” —Library Journal

“Nelson never chafes against the limitations of her chosen form, the realistic well-made story. It's the ideal medium for a writer who isn't afraid to remind us of the familiar, who values insight over epiphany.” —New York Times

“I don't know how I missed the extensively published and acclaimed writer Antonya Nelson, but I'm glad my first encounter was this collection of short stories. They are funny in a dark, subterranean way, gracefully told, and populated by characters you wouldn't want to know but already know intimately… These difficult characters… may seem impossible to like, but because of Nelson's fluid skill and insight, you end up caring about them all.” —Bust

“You have only to read Antonya Nelson's new story collection, Nothing Right, to appreciate her talent…. Nelson, unlike so many writers today, is not serving up magic realism in her stories. Her magic, in fact, is their powerful realism: deeply understood, beautifully expressed.” —Hartford Courant

“Nelson never chafes against the limitations of her chosen form, the realistic well-made story. It's the ideal medium for a writer who isn't afraid to remind us of the familiar, who values insight over epiphany. Nor is Nelson particularly interested in the way the world at large shapes our private lives. These stories could take place at just about any time in the last 30 years – after the sexual revolution diminished, without destroying, the scandal of adultery and the tragedy of divorce. Indeed, it comes as a surprise when, in ‘Shauntrelle,' Nelson alludes to ‘collateral damage,' and a world that contains Iraq and Afghanistan heaves into view. The wars that concern Nelson's characters are fought much closer to home.” —New York Times Book Review

“Antonya Nelson's Nothing Right [targets] the romantic poseurs in all of us.” —Vogue

Antonya Nelson is the author of eight books of fiction. Her works include Female Trouble and the novels Talking in Bed, Nobody's Girl, and Living to Tell. Nelson's work has appeared in the New Yorker, Esquire, Harpers, Redbook, and in many other magazines, as well as in anthologies such as Prize Stories, the O. Henry Awards, and Best American Short Stories. Her books have been New York Times Notable Books of 1992, 1996, 1998, and 2000. The New Yorker called her one of the "twenty young fiction writers for the new millennium." She is also the recent recipient of the Rea Award for Short Fiction and is a recipient of an NEA Grant 2000-01 and a Guggenheim Fellowship.

How does “Nothing Right,” the title story and the first in the collection, set the scene for the rest of the book? What themes, relationships, and problems in “Nothing Right” are echoed in later stories?

“We and They” and “Nothing Right” both revolve around an unexpected teenage pregnancy. How are the young couples’ circumstances similar and different in each story? Which pregnancy seems to have a better result for the families involved?

All of the stories in Nothing Right take place in the Midwest or Southwest. In which of the stories is the setting particularly important? Which stories especially conjure up a room, a house, a city, or a landscape?

In “Party of One,” Nicholas Dempsey goes from thinking sisters Mona and Emily are strikingly similar, to thinking they’re nothing alike. What changes Nicholas’s mind? What similarities and differences between the sisters are invisible to Nicholas?

Discuss the effects of secrets and lies in the story “OBO.” Who is the most duplicitous and who is the most truthful among the story’s four main characters, Abby, Lucia, Michael, and Christine? What secrets are hidden within the Bonatello family home in Wichita?

In “Falsetto,” Michelle sees a reflection of herself, her brother Ellton, and her boyfriend Max, and “Just that quick, she quit loving her boyfriend.” (88) What brings about Michelle’s sudden change of heart? How does her decision affect her relationship with her brother?

Pairs of adult sisters are prominent in the stories “Party of One,” “Kansas,” and “People People.” Compare the relationships in each of these stories. How do these sisters by turns help and hurt each other? Which sisters seem to have the healthiest sibling bond? Which have the most destructive?

Much of the action in “Kansas” takes place on the family’s cell phones. How does each family member use the family cell plan? What cracks and fissures in the family are revealed by this collective plan?

Discuss the influence of déjà vu in “Biodegradable.” What encounters and relationships seem to repeat themselves over the course of the story?

In “Shauntrelle,” Constance compares Fanny Mann’s first impressions to her own: Fanny Mann appears warm, while Constance appears cold. When do these impressions appear true? When do the two women seem to switch warm and cold roles?

In both “Or Else” and “OBO,” a character lies to gain entry into another family’s home. Compare and contrast David’s and Abby’s motivations for deceit. Which character’s reasons for lying seem more justifiable? Which liar appears more desperate by the end of the story?

“Or Else” ends on a question, as Danielle and David stand outside the Hart house: “Danielle asked [David], “Do you wish you were in there, instead of out here?” (239) Does David’s negative response feel like another lie, the beginning of a truth, or a combination of the two? Why does the story end on this uncertain note?

Adultery takes place frequently in Nothing Right; many of the characters are beginning, ending, or negotiating an affair. Discuss how Nelson portrays adultery in each story. On the whole, does she seem to humanize or demonize these sexual impulses? Explain.

If you’ve read Nelson’s stories or novels before, how does Nothing Right compare to her previous work? If you’re new to Nelson’s short stories, which made the strongest impression?

According to the San Francisco Chronicle, “Nelson, an astute observer of everyday conflicts, has skillfully mapped out life in this unforgettable collection, and sooner or later a reader will run into herself in a story, the character’s troubles as real as the reader’s own.” Did you find a version of yourself in any of Nelson’s characters? If so, which character spoke to you?