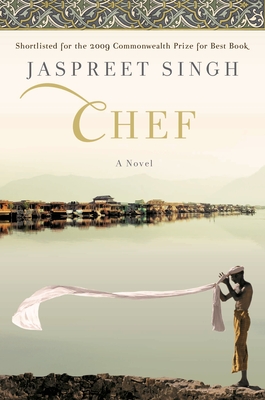 “In war-torn Kashmir, a young Sikh's training to become an army chef is the setting of this hauntingly atmospheric novel. Chef weaves together themes of conflict, duty, and allegiance to self, friends, and country. Throughout runs the current of food: as art, as love, as teacher, and even as weapon. A quietly passionate and beautifully crafted book.”
— Anne Adare, The Toadstool Bookshop, Keene, NH
View the List

Kirpal Singh is riding the slow train to Kashmir. With India passing by his window, he reflects on his destination, which is also his past: a military camp to which he has not returned for fourteen years.
Kirpal, called Kip, is shy and not yet twenty when he arrives for the first time at General Kumar's camp, nestled in the shadow of the Siachen Glacier. At twenty thousand feet, the glacier makes a forbidding battlefield; its crevasses claimed the body of Kip's father. Kip becomes an apprentice under the camp's chef, Kishen, a fiery mentor who guides him toward the heady spheres of food and women.
In this place of contradictions, erratic violence, and extreme temperatures, Kip learns to prepare local dishes and delicacies from around the globe. Even as months pass, Kip, a Sikh, feels secure in his allegiance to India, firmly on the right side of this interminable conflict. Then, one muggy day, a Pakistani terrorist with long, flowing hair is swept up on the banks of the river and changes everything.
Mesmeric, mournful, and intensely lyrical, Chef is a brave and compassionate debut about hope, love, and memory set against the devastatingly beautiful, war-scarred backdrop of occupied Kashmir.

“Serves up the memories both delicious and bitter… Singh adroitly blends lyrical accounts of Kip’s past with sensual renderings of the cold climate and piquant cuisine.”—Library Journal

“A kaleidoscopic journey through one of the most beautiful yet besieged areas in the world—Jaspreet Singh brings out the full poetry and heartbreak of Kashmir.”—Manil Suri, author of The Age of Shiva and The Death of Vishnu

“Chef is a haunting evocation of the emotional and physical landscapes of war-torn Kashmir. Jaspreet Singh is a very learned, gifted, and sensitive writer.”—Basharat Peer, author of Curfewed Night

“Jaspreet Singh’s Chef carries the scents of cardamom, ice, and sweat; is written with such a keen sense of rhythm that you can hear the book as you read it; and is placed not only between India and Pakistan but intriguingly between delicate cuisines and crude politics. The novel is transporting—an experience that is not easily laid to rest.”—Mark Kurlansky, author of Cod and Salt

“Jaspreet Singh has the soul of a poet and the pen of a novelist. Chef is an intricate, subtle, and beautiful book.”—P. K. Page, author of Cosmologies

“This is courageous writing that asks, and faces the impossibility of one-way answers to, questions of loyalty, love, ownership, and death.”—Daphne Marlatt, author of The Given

“Chef is easily one of the best first novels I’ve read in the past ten years. Singh takes on life as it is, with its lust, its mindless rivalry, its brutality and its redemptive epiphanies that never quite pan out, with an attention to detail that … is magnified rather than lessened by Singh’s exact and tender prose.”—Alberta Views

“Chef is an accomplished debut novel that portends even greater things from Singh.”—Montreal Gazette

“The forlorn beauty of Kashmir … has never been portrayed so elegantly as in this novel.”—Montreal Serai

“Like the people of India, the country’s food varies from region to region, with no simple consensus on how to prepare anything. But in Jaspreet Singh’s outstanding debut novel, as the characters learn to understand the origins of their food, they begin to understand each other… Quintessentially Indian, Chef is a book that eschews complex prose in favor of authenticity. Touching in its deft handling of Kip’s journey into maturity, Chef  helps its readers realize that true understanding comes when you recognize not only how people are alike, but also how they are different.”—Bookpage

“An artful and mostly beautifully poised indictment of the shameful role of India in the political and human-rights hell that is Kashmir now… The great strength of this brave book is its technique of indirection in imparting information to the reader. Singh comes at things aslant, seemingly casually; when their importance is revealed, it comes to the unsuspecting reader with the weight and shock of an unsuspected explosion.”—NeelMukherjee.com

“[A] luminous novel… Jaspreet Singh creates a swirl of sensual allusions, from the herbs and spices of Indian cooking, to the silken allure of women Kip dares not touch, to the withering heat of the subcontinent and the unearthly cold of the Kashmiri peaks. The sensuality adorns without obscuring the solemn core of the story.”—Boston Globe

“Jaspreet Singh’s sense of rhythm and his lyricism move the novel fluidly through time. Kirpal’s journey is complex and layered like any flavorful dish. Sit back and delight in this delectable story.” —Sacramento Book Review

“Unfortunately, I've already finished Chef by Jaspreet Singh…an ideal summer read for anyone who loves to eat and loves to cook, too.” —Hungry for Paris

"Thought-provoking...Throughout, Singh’s writing is lean and muscular, pithy and precise. Observations carry the ring of truth and linger in the mind." —PopMatters

Jaspreet Singh is a former research scientist who holds a PhD in chemical engineering from McGill University. His debut collection of short stories, Seventeen Tomatoes: Tales from Kashmir won the 2004 McAuslan First Book Prize, and his stories have appeared in The Walrus and Zoetrope. Born in Punjab and brought up in Kashmir, Singh now lives in British Columbia.

Discuss the setting of Chef.  If Kashmir is considered a “shadow of paradise” (13), why does Kirpal sense “a mingling of sadnesses here” (41)? Whose sadness is evident in Kashmir? How does the mood of the state relate to its natural beauty?

Explain Kirpal Singh’s reasons for returning to Kashmir after a fourteen-year absence. What does Kirpal seek in the valley city of Srinagar? What does he ultimately find there and what disappointments await him at the end of his journey?

What are Kirpal’s first impressions of Chef Kishen? How does Kirpal’s relationship with Kishen change over the course of the novel? What important lessons does Kirpal learn from Kishen, and where do the two chefs radically diverge?

Much of the action of Chef takes place in memory, as Kirpal looks back on past events during his journey back to Kashmir. What is the effect of this retrospective view? What attitude does Kirpal seem to have toward his memories of Kashmir?

Several love interests cross Kirpal’s path: Patsy Chowdhry, the Kashmiri woman washing apples; the nurse; and Irem. Why is Kirpal attracted to each of these women? Why has Kirpal remained single all these years?

Discuss the differences between Kishen and Kirpal’s styles of cooking. What are the signature dishes of each chef? What techniques and philosophies of food does Kirpal learn from Kishen, and what styles does he develop independently of his mentor? How does Irem also influence Kirpal’s approach to cuisine?

What emotional and physical effect does the Siachen glacier have on Chef Kishen? Discuss his scene of violence and suicide on the glacier. What is Kishen protesting? How does Kirpal react to Kishen’s revolutionary actions? Was Kishen’s protest effective in the end? Why or why not?

Rubiya grows up in the years of Kirpal’s absence from Srinagar. How has Rubiya’s life changed over the past fourteen years? What realizations does she have about the political situation between Pakistan and India? How does her poetry and journalism express these realizations? Whose form of political protest seems more effective: Rubiya’s or Kishen’s? Why?

What effects from the brain tumor does Kirpal begin to see and feel on his journey from Delhi to Kashmir? How does he seem to be dealing with his illness? How does General Sahib’s death affect Kirpal’s chances of recovery?

Rubiya writes, “I feel the story of Soofiya [Irem] and little Naseem is the story of the whole of Kashmir” (233). How does Irem’s story represent the beauty, troubles, and conflicts of Kashmir? Is Irem a terrorist, as accused? Why or why not?

Thinking about his ailing mother, Kirpal realizes, “Cooking was her way to say how she felt towards people close to her” (246). How does Kirpal also use cooking as a means of communication? In which scenes does Kirpal attempt to express his feelings through food?

Discuss General Kumar’s leadership in Kashmir. What sort of leader is he? What relationship did he have with Major Iqbal Singh, Kirpal’s father? How does he fare during military scandals, such as Colonel Chowdhry’s “coffin scam”? How have politics affected his personal and family life?

Chef includes a hand-drawn map of the Siachen glacier, a complete recipe for Rogan Josh, and lines of Arabic script that depict Kirpal and Irem’s first conversation. What do these extra elements add to the experience of reading Chef?

Discuss Jaspreet Singh’s writing style. What passages of Chef are particularly poetic? How does he bring the landscape of the Kashmiri valley and the Siachen glacier to life? What foods are described in particularly lush detail?