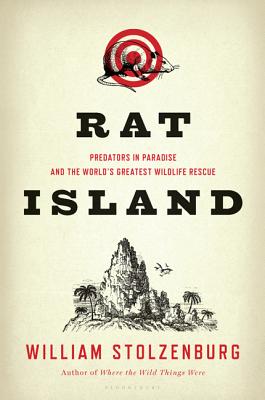 Predators in Paradise and the World's Greatest Wildlife Rescue

Rat Island rises from the icy gray waters of the Bering Sea, a mass of volcanic rock covered with tundra, midway between Alaska and Siberia. Once a remote sanctuary for enormous flocks of seabirds, the island gained a new name when shipwrecked rats colonized, savaging the nesting birds by the thousands. Now, on this and hundreds of other remote islands around the world, a massive-and massively controversial-wildlife rescue mission is under way.

Islands, making up just 3 percent of Earth's landmass, harbor more than half of its endangered species. These fragile ecosystems, home to unique species that evolved in peaceful isolation, have been catastrophically disrupted by mainland predators-rats, cats, goats, and pigs ferried by humans to islands around the globe. To save these endangered islanders, academic ecologists have teamed up with professional hunters and semiretired poachers in a radical act of conservation now bent on annihilating the invaders. Sharpshooters are sniping at goat herds from helicopters. Biological SWAT teams are blanketing mountainous isles with rat poison. Rat Island reveals a little-known and much-debated side of today's conservation movement, founded on a cruel-to-be-kind philosophy.

Touring exotic locales with a ragtag group of environmental fighters, William Stolzenburg delivers both perilous adventure and intimate portraits of human, beast, hero, and villain. And amid manifold threats to life on Earth, he reveals a new reason to hope.


Praise For Rat Island: Predators in Paradise and the World's Greatest Wildlife Rescue…

“Stolzenburg offers a fascinating, if occasionally grisly, peek into the emerging science of preservation through eradication.” —Salon

“Gripping… Rat Island is less a tragedy of paradise lost than an uplifting tale about the heroic struggle to regain indigenous habitats by exterminating the unwanted predators…[A] powerful book.” —Financial Times

“Stolzenburg brings a keen eye and thirst for adventure to the front lines of this controversial battle…this study brings important attention to a little known issue, and Stolzenburg probes the moral implications of saving one species by killing another with remarkable fair-mindedness and a temperance rare and needed in the passionate animal rights debate.” —Publishers Weekly

“A tough, nuanced consideration of ethical issues that arise from man's relationship to nature.” —Kirkus Reviews

“[Stolzenburg] offers a solid historical background on the topic and effectively conveys the complicated nature of balancing a disrupted island ecosystem.” —Library Journal

Will Stolzenburg has studied predator control techniques and worked as a wildlife technician, monitoring endangered species. He has written hundreds of magazine features and columns on the ecology of rarity and extinction for Science News and Nature Conservancy, among others. He lives in Shepherdstown, West Virginia.
Loading...
or
Not Currently Available for Direct Purchase