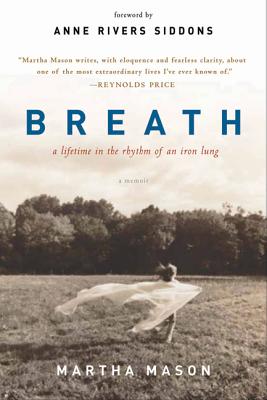 A Lifetime in the Rhythm of an Iron Lung: A Memoir

After contracting polio as a young girl Martha Mason of tiny Lattimore, North Carolina, lived a record sixty-one of her seventy-one years in an iron lung until her death in 2009, but she never let the 800-pound cylinder define her. The subject of a documentary film, an NPR feature, an ABC News piece, and a widely syndicated "New York Times "obituary, Martha enjoyed life, and people. From within her iron lung, she graduated first in her class in high school and at Wake Forest University, and was elected to Phi Beta Kappa. She was determined to be a writer and, with her devoted mother taking dictation, she became a journalist but had to give up her career when her father became ill. Still, Martha created for herself a vast and radiant world holding dinner parties with the table pushed right up to her iron lung, voraciously reading, running her own household, and caring for her mother when she became ill with Alzheimer's and increasingly abusive to Martha. When voice-activated computers became available, Martha wrote "Breath," in part as a tribute to her mother. "This book is her story," writes Anne Rivers Siddons in her preface, "told in the rich words of a born writer. That she told it is a gift to everyone who will read it. That she told it is also as near to a miracle as most are likely to encounter.

Martha Mason, who is believed to have lived longer in an iron lung than any other person, resided in her family home in Lattimore, N.C., attended by three faithful assistants. She died in May 2009.

Praise For Breath: A Lifetime in the Rhythm of an Iron Lung: A Memoir…

“Mason maintains a wonderful writerly detachment from her material, turning her remarkable life into a vivid, exalted, truly humbling tale of inspiration.”—Publishers Weekly

“Fascinating, inspirational and brave, Breath is a testament to the luscious fruits of Martha Mason’s writing, and a life lived fully and well.”—BookPage

“So this book…is well worth reading. It really does sum up a vision of America as absolutely reliable, decent, resourceful and kind -- just as Martha Mason and her wonderful mother managed to be during their difficult but extremely rewarding lives.”