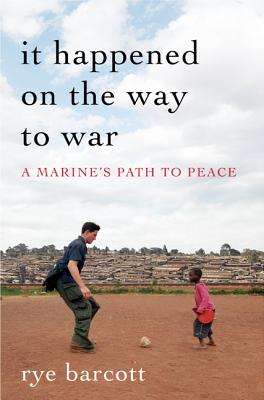 It Happened On the Way to War

In 2000 Rye Barcott spent part of his summer living in the Kibera slum of Nairobi, Kenya. He was a college student heading into the Marines, and he sought to better understand ethnic violence-something he would likely face later in uniform. He learned Swahili, asked questions, and listened to young people talk about how they survived in poverty he had never imagined. Anxious to help but unsure what to do, he stumbled into friendship with a widowed nurse, Tabitha Atieno Festo, and a hardscrabble community organizer, Salim Mohamed.

Together, this unlikely trio built a non-governmental organization that would develop a new generation of leaders from within one of Africa's largest slums. Their organization, Carolina for Kibera (CFK), is now a global pioneer of the movement called Participatory Development, and was honored by Time magazine as a "Hero of Global Health." CFK's greatest lesson may be that with the right kind of support, people in desperate places will take charge of their lives and create breathtaking change.

Engaged in two seemingly contradictory forms of public service at the same time, Barcott continued his leadership in CFK while serving as a human intelligence officer in Iraq, Bosnia, and the Horn of Africa. Struggling with the intense stress of leading Marines in dangerous places, he took the tools he learned building a community in one of the most fractured parts of Kenya and became a more effective counterinsurgent and peacekeeper.

It Happened on the Way to War is a true story of sacrifice and courage and the powerful melding of military and humanitarian service. It's a story of what America's role in the world could be.

“The best book to land on my desk this year…A heart-warming tale, told with both passion and candor. I think it should be required reading for two communities that are often hostile to each other: the NGO world and soldiers.” —Bobby Ghosh, TIME.com

“Detailed, vivid, earnest, and remarkable in rendering with equal intensity his interactions with poor children in Nairobi and his experiences at OCS or on patrol in Fallujah. I was struck by its epigraph, which is also the slogan of Carolina for Kibera: "Talent is universal; opportunity is not." That is one of the clearest lessons of my own experience around the world over the years. It is heartening, in the current political mood, that a young, talented, ambitious American would choose that as the theme he wanted to stress... An encouraging story. Check it out..” —James Fallows, TheAtlantic.com

“[Barcott's] inspiring memoir shows just how much one man can accomplish with determination and heart.” —Booklist

“Moving, sad, humorous, sometimes dramatic, and beautifully written…[It Happened on the Way to War] is a story about what is possible, and will be inspirational to new generations of leaders and public servants.” —The Officer

Rye Barcott founded the renowned non-governmental organization Carolina for Kibera (CFK) with Salim Mohamed and Tabitha Atieno Festo while he was an undergraduate at the University of North Carolina at Chapel Hill. After graduation, he served as a Marine for five years on active duty. In 2006 ABC World News named then Captain Barcott a Person of the Week and Person of the Year for his dual service to Kibera and the Marine Corps. As a Reynolds Social Entrepreneurship Fellow, he earned master's degrees in business and public administration from Harvard University. He is currently a member of the World Learning Board of Trustees and a TED Fellow living in Charlotte, North Carolina.